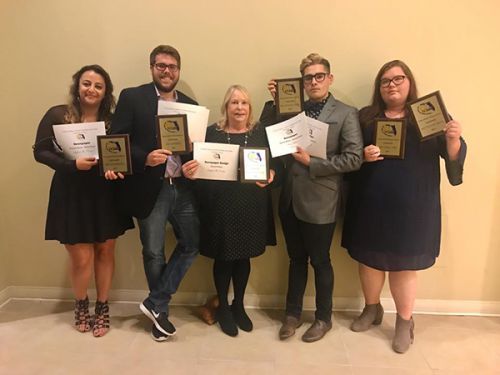 The Corsair won second in the General Excellence category along with six first-place awards, two other second-place awards and four third-place awards. Dr. Paula Ingram is the faculty advisor for the student newspaper. 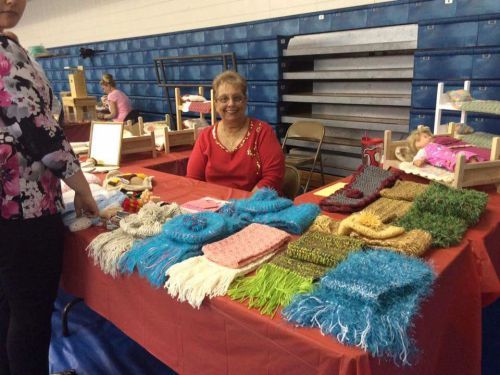 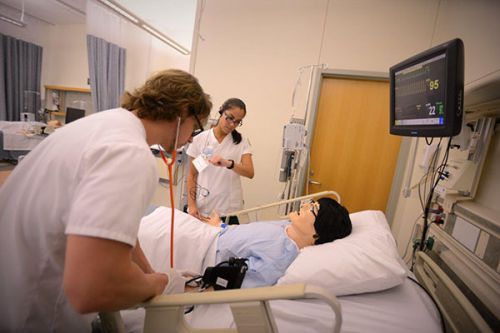 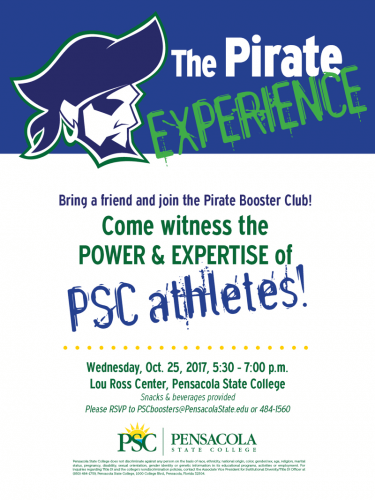 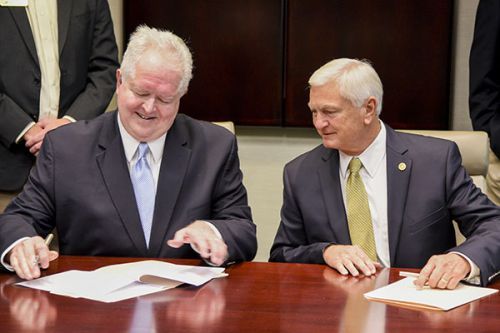 Pensacola State College and Florida State University Panama City administrators have partnered to make it easier for PSC students to transfer to the university. 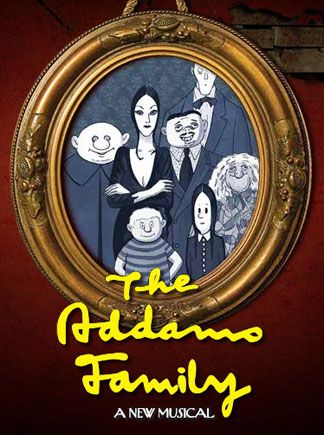 Don’t be frightened. Come right in and relax – if you can. The dimly lit, slightly macabre, Ashmore Auditorium is just the place to catch up with the kooky-spooky Addams Family, Oct. 27-29 and Nov. 3-5.

Sssssshhh….no questions… just be there at 7:30 p.m. for Friday and Saturday performances and 2:30 p.m. for Sunday matinees. Continue Reading ‘The Addams Family Musical’ scares up fun! 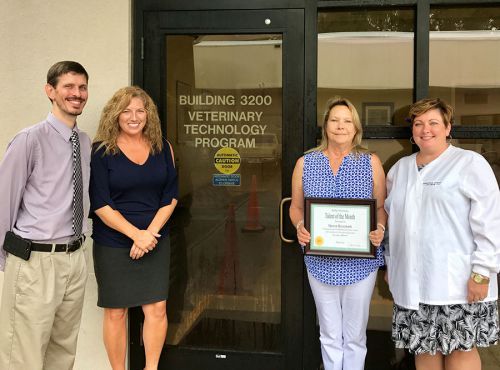 August Talent of the Month

Nona Brockett, an administrative assistant in Pensacola State College’s Veterinary Technology Program, has been selected as the Kelly Services Talent of the Month for August.

Burkett has been at the college since July 2015 and was nominated by Sarah Meyer-Paterson, her supervisor and director of the college’s Vet Tech Program.

“I could nominate Nona Burkett every month because she is such a valuable asset to me and this program,” Meyer-Paterson said. “She comes in every day with a great attitude and is always willing to help the students.” Continue Reading August Talent of the Month 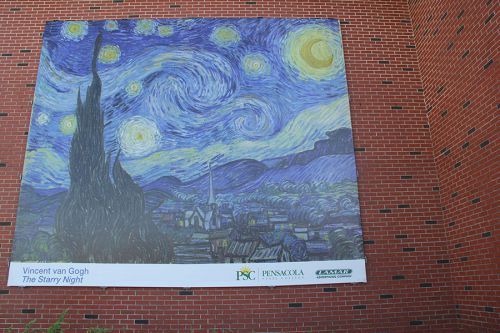 “The Starry Night” by Vincent van Gogh has been installed on the back side of the Ashmore Auditorium, Building 8, while “The Kiss” by Gustav Klimt is on the south end of Building 14, facing the Charles W. Lamar Studio Gallery.

The two reproductions join the Dutch masterpiece, “Girl with a Pearl Earring,” on Building 14, and “Boy in Mid-Flight,” an image from renowned National Geographic photographer Steve McCurry on Building 4. Continue Reading PSC has new artwork on Pensacola campus 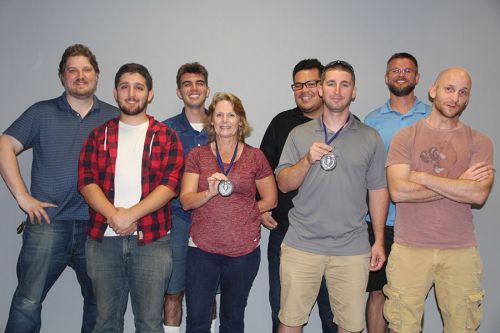 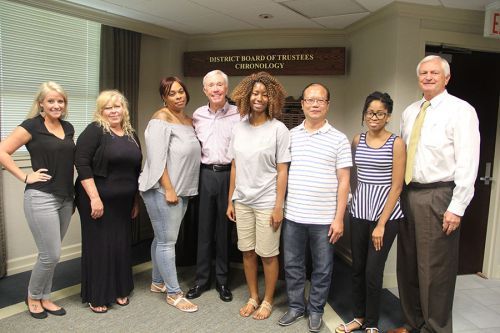 Shamira Tyler wants to be a registered nurse. Megan Weatherspoon aspires to be a physical therapist. Jolie Sutter dreams of becoming a graphic artist.

This fall, all three are enrolled in Pensacola State College because Sandy Sansing stepped forward to make their goals a reality.

Tyler, Weatherspoon and Sutter are among 16 Pensacola State students who have received Sansing Universal Scholarships. Each scholarship will cover tuition, fees and books up to $1,500. Along with demonstrating financial need, recipients must have a 2.0 grade point average and be a U.S. citizen or resident alien. The scholarships were awarded during the 2016-17 and fall 2017 academic years. Continue Reading 16 Pensacola State students named Sandy Sansing Scholars 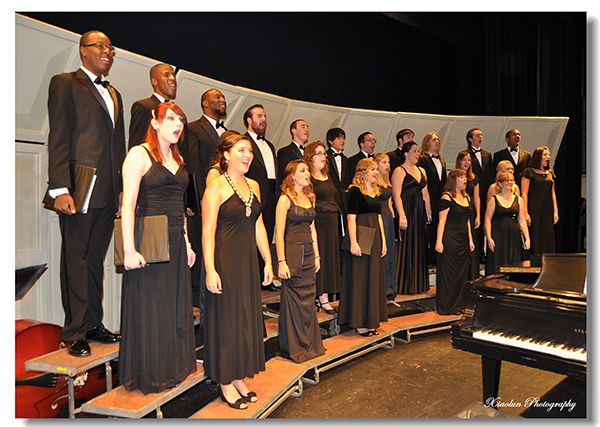 Pensacola State College presents the Concert Chorale and Entertainers Jazz Choir in a free concert at 7:30 p.m. Friday, Oct. 6, at the Ashmore Auditorium, Building 8, on the Pensacola campus.

The public is invited and no tickets are required. Seating begins at 7 p.m. Continue Reading PSC Concert Chorale and Jazz Choir Perform Free Oct. 6 at 7:30 p.m. 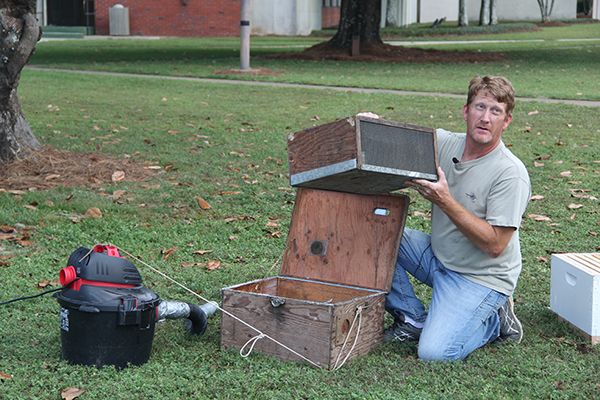 A family of “bee-nevolent” residents were relocated from Pensacola State College to sweeter climes – well actually Pace – on Friday afternoon. 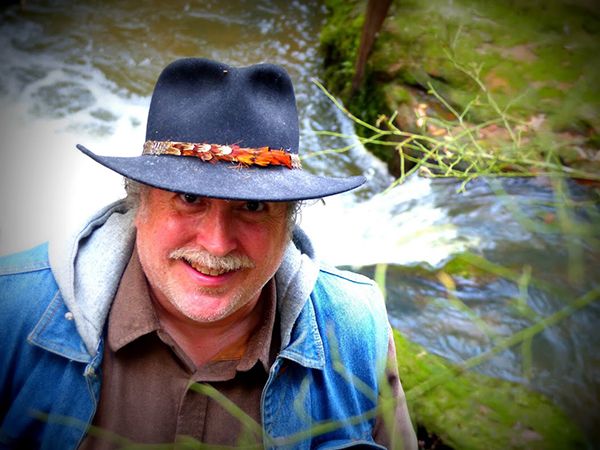 The First Seminole War will be the theme of the 35th Gulf South History and Humanities Conference set for Oct. 5-7 at the Pensacola Beach Hilton. 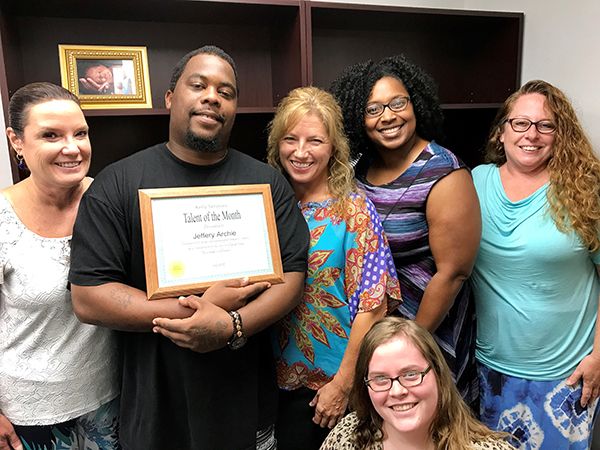 July Talent of the Month

Jeffery Archie, a carpenter in Pensacola State College’s Facilities, Planning and Construction Department, has been named the July Talent of the Month by Kelly Services.

Archie who has been with the college for 15 years was nominated by his supervisor, Diane Bracken because of his outstanding work ethic. Continue Reading July Talent of the Month 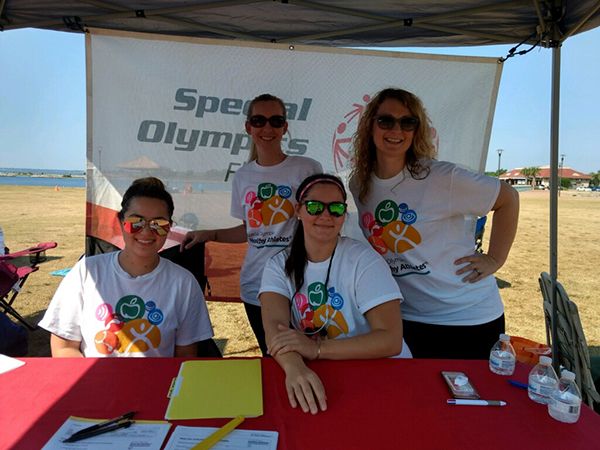 PSC students give back during service-learning project 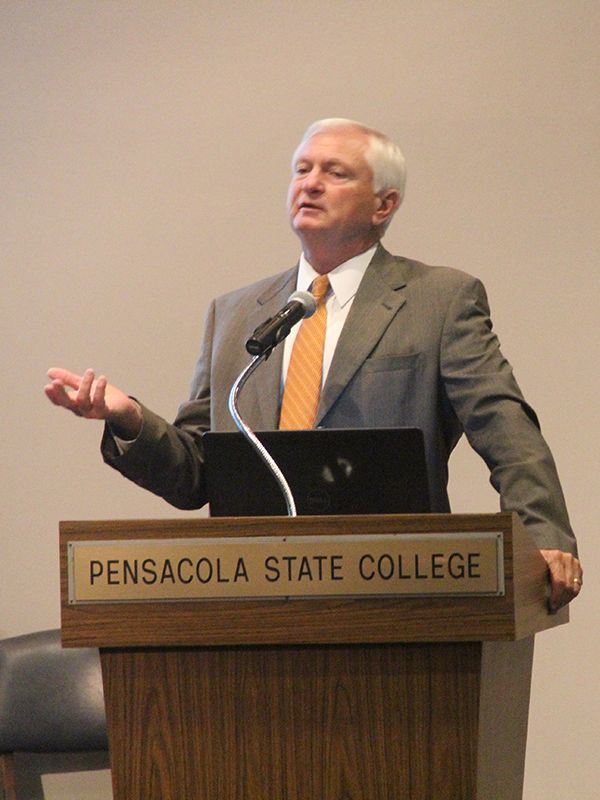 Pensacola State faculty and staff were introduced to the college’s QEP – Quality Enhancement Plan, The Pirate PATH to Success – during recent meetings held on the Pensacola, Milton and Warrington campuses. 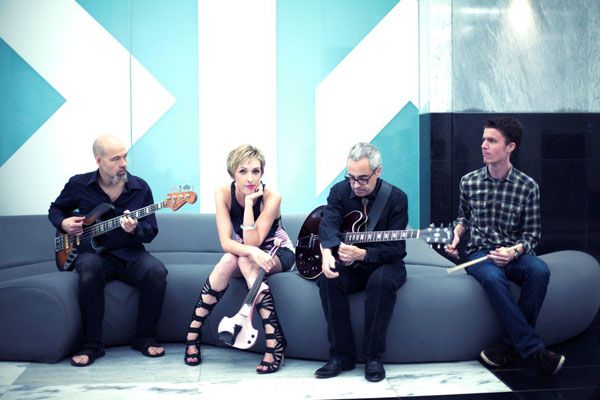 The free event provides an opportunity to hear a variety new vocal and instrumental music written by contemporary composers, most of whom are attending the event. Several works on the program are world premieres.  Continue Reading PSC Hosts Free ComposerFest XIII Oct. 8 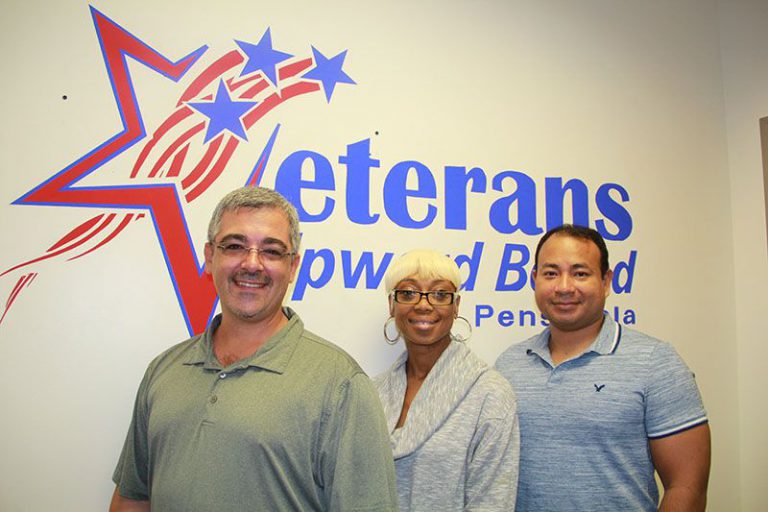 Pensacola State College has received a $1.3 million grant from the U.S. Department of Education to renew its Veterans Upward Bound (VUB) program for the next five years. This program assists 130 veterans per year as they gain skills needed to enter college and become successful students. 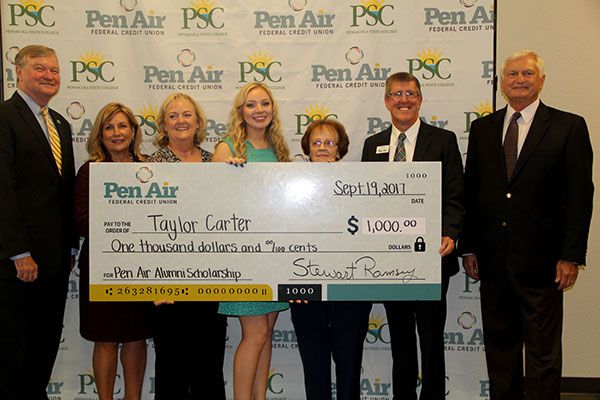 ‘Broadway’s Next H!T Musical,’ Galactic Cowboys to entertain at PSC

The last weekend of September will be a busy one for entertainment seekers.
The hilarious “Broadway’s Next H!T Musical” will be staged at 7:30 p.m. Thursday, Sept. 28, at Pensacola State College’s Ashmore Fine Arts Auditorium, Building 8, on the Pensacola campus.
On Saturday, the Galactic Cowboy Orchestra will bring its eclectic mix of art-rock and jazz fusion to the college. The 7:30 p.m. concert also will be held in Ashmore Auditorium. Continue Reading ‘Broadway’s Next H!T Musical,’ Galactic Cowboys to entertain at PSC 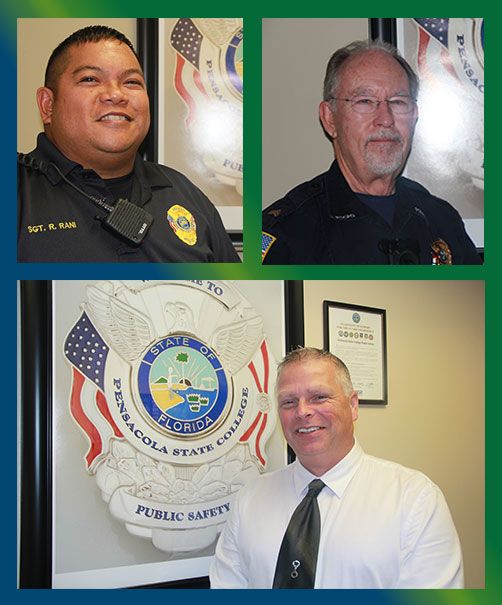 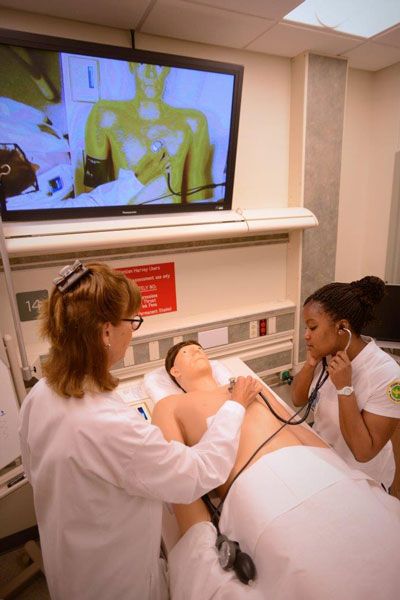 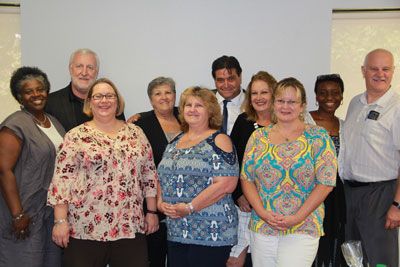 Robert Flores, 2018 president of the Association of Florida Colleges, along with AFC Executive Director Michael Brawer visited Pensacola State College on Wednesday, Sept. 6. The two executives set in during the Pensacola AFC Chapter’s General Membership Meeting. They also spoke to members about the 2018 Legislative Outlook and other issues facing higher education in Florida. Flores and Brawer are pictured with some members of the college’s AFC chapter executive committee. Continue Reading AFC leaders visit Pensacola State College 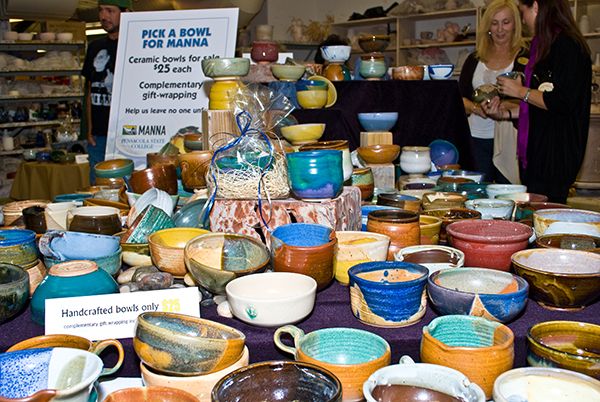 10TH ANNIVERSARY OF PICK A BOWL/ FILL A BOWL EVENT

Manna Food Pantries is celebrating the 10th Anniversary of Pick A Bowl and Fill A Bowl on Friday, Sept. 22.  The fundraising event will be held from 6PM – 8PM at Hartsell Arena/Ross Center on the Pensacola State College campus. Tickets are only $30 and can be purchased online at www.MannaHelps.org.  For each ticket sold, Manna will provide healthy food for a week for someone in need.

Each participant will receive a handmade bowl thrown by a local potter plus enjoy samplings of soup from over a dozen restaurants.  The evening will also include a silent auction featuring unique original works and music by local band Bring On The Benjamin’s.  Participating restaurants include Classic City Catering, Four Seasons, Nancy’s Haute Affairs/Skopelos, Pot Roast & Pinot, and The Grand Marlin to name a few.  Local WEAR newscaster Bob Solarski will also be cooking up some delicious soup for the crowd. Continue Reading 10TH ANNIVERSARY OF PICK A BOWL/ FILL A BOWL EVENT 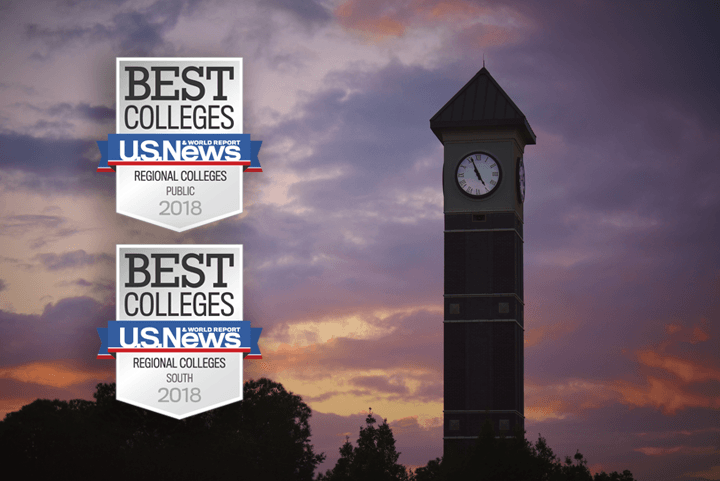 Pensacola State has been ranked as one of the best colleges ─ regionally and nationally ─ by U.S. News and World Report. Published annually, the report ranks more than 1,400 private and public colleges and universities and is a guide to help parents and students select schools. 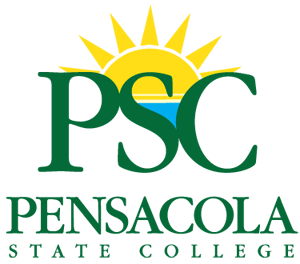 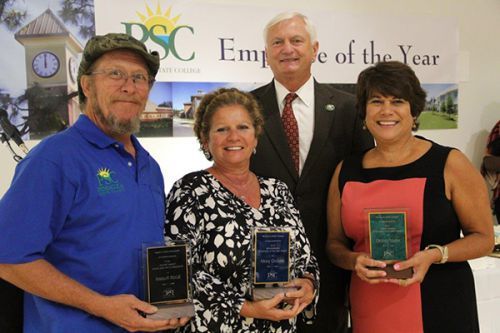 Pensacola State College recognized three Employees of the Year at a recent ceremony. Colleagues, friends and family filled the lecture hall in the new Charles W. Lamar Studio Gallery as PSC President Ed Meadows presented awards and called attention to the accomplishments of each honoree.

Graves was praised as the unsung hero who never says “can’t be done” in response to a data request. Her ability to gather, organize and make sure that data is reported accurately was cited as essential to the success of ITS projects. 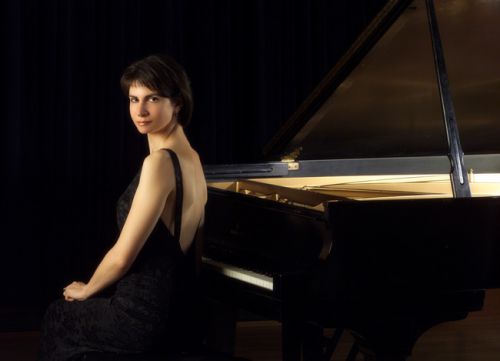 Praised by critics as “dazzling” in the New York Times, “a diva of the piano” in the Salt Lake City Tribune, and “a mesmerizing risk-taker” in the Cleveland Plain Dealer, Ukrainian-American pianist Marina Lomazov has established herself as one of the most passionate and charismatic performers on the concert scene today.

A Steinway Artist and winner of numerous international piano competitions, Lomazov has performed in nearly all 50 United States and throughout South America, Europe and Asia. She has given major debuts in New York, Boston, Chicago, Los Angeles, Shanghai and Kiev. Additionally, she has performed as soloist with the Boston Pops, Rochester Philharmonic, Eastman Philharmonia, Chernigov Philharmonic in Ukraine, and KUG Orchester Graz in Austria. Continue Reading PSC Kamerman Piano Series presents Marina Lomazov in concert Sept. 17