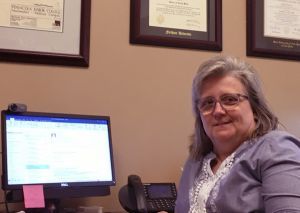 Karen McCabe’s daughter Emma was the first person to refer to her as “Doctor.”

“It was in a text,” said Karen McCabe, director of the Pensacola State College South Santa Rosa Center. “But she was the first.”

Emma McCabe was just starting her own elementary school journey when her mother Karen took her first steps in 2008 toward a doctorate degree. Emma graduated from Gulf Breeze High School this spring. And her mother Karen earned her doctorate in Educational Leadership from Liberty University in Virginia this summer.

“I’m glad it’s done,” said Karen McCabe from her office at the South Santa Rosa Center off Highway 98, not far from the Gulf Breeze Zoo. “It’s tough when you’re trying to juggle so much. But it puts you in a position where you have a better understanding of the students we have here and everything they’re having to juggle. We have a lot of younger students, but we also have veterans, and moms and dads coming back for a second career. And they’re not just dealing with schoolwork. They have jobs, families and other obligations. It can be tough. I know, because I had to do it. But when you’re finished, it’s very rewarding.”

She felt it was important to earn her doctorate and finish what she started back in 2008.

“I’ve always wanted to better myself and receive as much education as possible,” McCabe said. “I had to put it on hold a few times, but I was finally able to finish.”

Her dissertation was on the Benefits of Career and Technical Education, which works well with the College’s overall mission to promote workforce education.

“My first professional job was as a school social worker at a trade school in New York,” McCabe said. “I’ve always been a strong believer and advocate for technical education. A lot of students might not be suited for the traditional academic environment, but really thrive in a technical setting where there’s a lot of hands-on work. And the neat thing is, so many of those tech and career certificate programs will prepare a student for a pretty good paying job that’s always going to be there, and they’re leaving school with little or no debt.”

“We started the cybersecurity program last January,” McCabe said. “We have a lab and a room set up just for those classes. That’s a new program we’re really trying to push.”

She said she hopes the program will attract military personnel and dependents from nearby Eglin Air Force Base and Hurlburt Field.

“When they finish work, it’s hard for them to get to Pensacola for classes,” she said. “But it’s doable for them here. We think it’s a really good program in a field that’s experiencing tremendous growth.”

Speaking of tremendous growth, McCabe hopes the South Santa Rosa Center will grow and expand in the future. There’s certainly enough land – 105 acres. Yet there’s only one main building on the center grounds, picturesque with its ponds and tall water fountains and the nearby wildlife.

There’s even a “100-year-plan” rendition of the South Santa Rosa Center framed in her office, showing the center’s acres filled with additional buildings and classrooms.

“I think there’s tremendous opportunity for growth,” McCabe said. “l’d love to see our numbers grow and we eventually turn into a campus with additional buildings. We’re proud of what we do here, and we want more people in the community to know that we’re here and what kind of educational opportunities we can offer them.”