Troy Moon: Old guy credits PSC with teaching him how to tell time 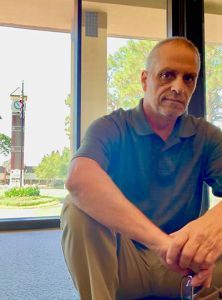 I’ve learned how to tell time! (I know it’s not attractive to brag, but I can’t help it. It’s a pretty big deal, I think.)

And I have Pensacola State College to thank for this grand feat, particularly my instructor Amber Carey, who wasn’t inducted into the PSC Academy of Teaching Excellence last year for nothing.

I should have been clearer – I have learned to tell time in Spanish! Did I not mention that Señora Carey is my Spanish I teacher? My bad, or, get this, “lo siento.” We’re only in the third week of the fall semester, and so far so bueno. (I know. Now I’m just showing off.)

But it’s a new semester and I’m excited about both my classes, Spanish I and an Astronomy Lab. Two more classes after this semester and I’ll be ready to graduate, only 34 years after I started my college journey back when the school was called Pensacola Junior College.

Then, I hope to transfer to the University of West Florida to earn my bachelor’s degree, because, you know, you can “Go Here. Get There.” (I’ve heard that somewhere before.) And besides, I’m kind of enjoying this book-learning stuff. Actually, I like it a lot.

Maybe it’s just because I’m busy like most folks, but I actually prefer the online classes that so many of us have to take because of the COVID-19 crud. This fall, about 80 percent of all PSC classes are being offered online, the first time that there have been more – and it’s a lot more – online courses offered than face-to-face classes.

I just finished interviewing a few young students for a story on PSC’s Presidential Scholars, and the recent high school graduates are a little bummed they don’t get to experience the traditional college experience during their first semester. Though there’s something to be said for doing your classwork from your couch at the time of your choosing – though you’re definitely not watching “Family Guy” in the background while studying.
But even if you did, it does NOT mean you don’t take your classes seriously.

But hopefully, these young students will be on campus soon enough. Though I’m going to continue to take as many online classes as possible. I just hope I enjoy my classes next spring as much as I’m enjoying this semester’s classes.

I’m enjoying Spanish, largely because of Carey’s engaging teaching style. I loved how she said we’re going to learn a new language the same way a baby or toddler learns his or her native language. And I loved her likening learning a second language as deciphering a secret code – a secret code only known to about a half billion people in this case. But still.

As for my Astronomy Lab, what can I tell you? I was originally nervous about what this lab would entail, but so far we’ve made a “star wheel,” which helps us identify what’s in the sky and when, and this past week the way-cool online program called Stellarium to engage in a little forensic astronomy.

Using Stellarium, we had to identify stellar objects seen in various paintings by Vincent Van Gogh based on the time, date and coordinates of when the paintings were made. How cool is that? Take a look at the Van Gogh painting “White House At Night.” See what looks like a star in the sky? That’s no star. That’s Venus. Again, how cool is that?

This week’s Astronomy Lab won’t be near as cool. I opened the lab and one of the first things I see is a formula with what looks like a zero with a horizontal line across it. I don’t even know how to replicate it on a keyboard. In fact, I’m suspecting it’s something my instructor, Andrew Vanden Heuvel, just made up to mess with us. I know my numbers. And zero doesn’t have a line in it. But what do I know? It’s Greek to me. (And I’m suspecting I might be right.)