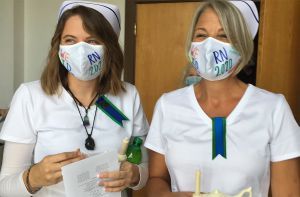 Jorianna Mallow just had one request of her mother, Kristie Chelico, on the first day of school.

“Just wait a week until you tell anyone you’re my mother.”

That would be hard for Kristie. After all, she is a talker. And she wanted to tell everyone in each of her nursing classes that she and Jorianna were mother and daughter. And that they were going to become nurses together.

And they did, both graduating from Pensacola State College’s Nursing Program on Aug. 1, two days after they received their nursing pins at the PSC Department of Nursing Pinning Ceremony.

“It was very strange,” Jorianna said. “My Mom is outgoing and likes to talk. I usually keep to myself. The first day of school, I’m always nervous. My Mom is fine talking in front of a class. I’m the opposite. Like ‘Don’t look at me.’ So I asked her to at least wait a week until she told everyone. Because she would get up there and tell her whole life story.”

Kristie admitted she would.

“I’m very outgoing,” she said. “I’m a talker and I like people. I would have told them everything.”

But she kept her word to her daughter. In fact, some of their fellow students didn’t find out until the end of the program.

“A few of them said, ‘Now it all makes sense’,” Kristie said. “Because they could tell we were close.”

But this nursing journey together wasn’t some well-concocted master plan. 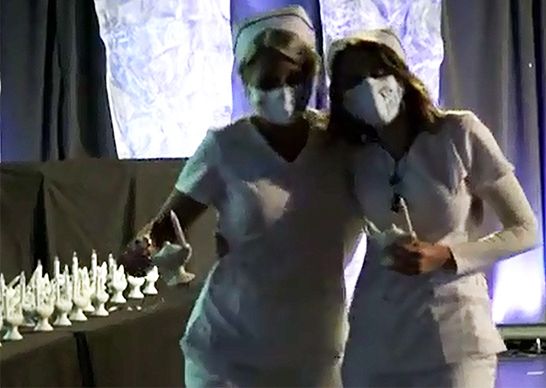 Jorianna had originally come to PSC to earn a degree to teach children with special needs. But when her grandmother needed end of life care, it was Jorianna, Kristie and a close family friend who cared for her.

“I know caring for my Mom really affected both of us,” Kristie said. “And we probably started thinking about (nursing) at the same time.”

Kristie, 47, had been a Certified Nursing Assistant when she was younger, after undergoing a six-week course. And when the family was living in New York, where they’re from, she also graduated from a local police academy.

But then came marriage and children.

“I stayed home and raised my children,” said Kristie, a mother of four. “But after my divorce, well, I’m in my 40s. I didn’t want to take a step backward in life. Nursing seemed like a good option and opportunity.”

In addition to the care she provided for her grandmother, Jorianna had another inspiration for becoming a nurse, witnessing a friend dying in a vehicle accident. She arrived before emergency personnel – she and her friend lived in the same neighborhood and the accident was nearby – and felt helpless.

Jorianna hopes to find a job in pediatric nursing. Her mother wants to pursue a job in the mental health side of nursing.

And both are grateful that they were able to make the journey into nursing together.

Jorianna was so excited she even decorated protective masks for herself and her mother. Both masks have “We Did It” and “RN 2020” written in colorful ink. Jorianna’s mask also reads “Proud Daughter”. Kristie’s mask reads “Proud Mama.”

“I am proud of her,” Jorianna said of her mother. “She busted her butt to do this. I always knew she was a strong woman, but she’s even stronger than I thought. She was a stay-at-home for about 20 years and then took on nursing. That’s pretty remarkable.”

And Kristie is equally proud of her daughter.

“I’m super proud of her,” Kristie said. “I get emotional thinking about it. You don’t know how many times I called her for advice. You must remember, I’m at an advanced age compared to most of the students. I’d call her and say, ‘So now what am I supposed to do?’ or ‘What are they asking me?’ I probably wouldn’t have made it without her. She will make a great nurse.”