Welcome (Or Welcome Back) to Pensacola State College 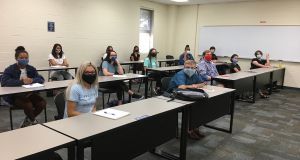 The 2020 fall semester began on a hot summer Monday for Pensacola State College students. But it was a different “First Day of School” than the College has ever experienced before.

Students were still scurrying across PSC campuses and centers, but not as many as would on a traditional opening fall semester day.

Fewer on-campus students weren’t the only visible differences on Monday. Everyone in every class and in every common area wore a face mask on in an effort to stymie the spread of COVID-19. Signs were posted everywhere urging proper social distancing and occupancy limits. Disinfectant and cleaning supplies were available in every classroom. 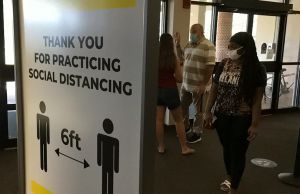 Students practiced social distancing even while waiting in line at the Pensacola campus bookstore.

Tashiana Mars is a 17-year-old incoming student in the Culinary Arts Program. Her first class was a Culinary Technique class where students were spread out at separated stations – yet all remained masked, as is PSC classroom policy.

“They’re doing a good job at making sure everyone knows about the masks and social distancing,” said Tashiana, who wants to be a personal chef for athletes down the road. “There are signs everywhere, so you definitely can’t forget or say you didn’t know.”

One of her classmates is 62-year-old Helene Williams, who said she did take some college classes in the 1970s, but none since. Until Monday, that is.

While Tashiana wants to cook for professional athletes, Helene’s goal is a little closer to home.

“I got married three years ago and I want to learn how to cook for him,” she said of her husband. “My skills are pretty poor, to be honest. That’s why I’m here. He’s lost 10 pounds since we were married. It’s supposed to be the opposite.”

All across the College’s Pensacola campus there were signs of a new semester, as students lined up for everything from parking decals to textbooks.
At the Pensacola campus bookstore, students were spaced 6 feet apart in a not-so-crowded line that did spill into the Student Center, but only because of the spacing. Bookstore Manager Beth Smithers said that even the store’s sales methods have shifted as a result of COVID-19.

“We usually do about 30 percent online business. Now it’s 70 percent,” said Smithers who added the line for books was steady throughout the day.

“There were a couple of people this morning without masks, but they were told they couldn’t be here without them. But for the most part everyone has been awesome. They’re following the safety protocols and it’s working.” 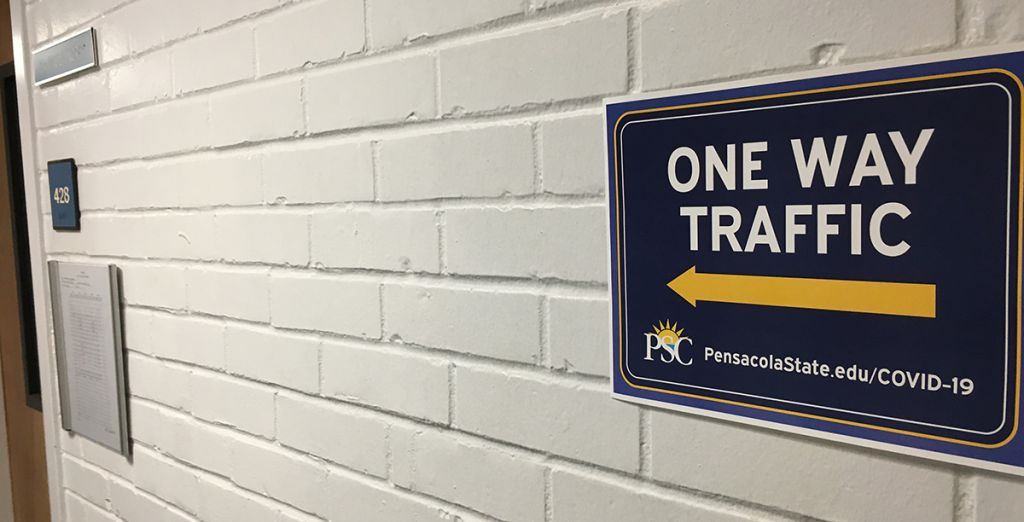 PSC hallways were adorned with plenty of safety signage for the first day of classes.