PSC President Ed Meadows was a Fightin’ what? Answer revealed at first ‘Pizza with the President’ session of fall semester

Pensacola State College President Ed Meadows was talking to students on the Warrington campus about his own educational background, including attending Delta State University as an undergrad.

That prompted a question from PSC EKG student Sherry Sellers, who had previously attended Delta State University in Cleveland, Mississippi.

“Were you a Fighting Okra?” she asked, referring to Delta State’s unofficial mascot – officially it’s the Statesmen.

Meadows admitted he was, also telling the students he played football and ran track at the university for two years before realizing he “wasn’t that good of an athlete at the college level.” Also, he had “to get busy and start studying or I wasn’t going to graduate.”

It was all on the table at the “Pizza with the President” event at the Warrington campus on Monday, Sept. 20. About 60 students, many in medical scrubs, attended the event, where students received free pizza and were able to ask question of Meadows and other College administrators. 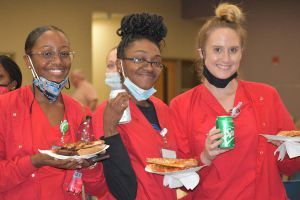 Students enjoy some of the free pizza offered at the “Pizza With the President” session at the Warrington campus.

“Historically, we always do this twice a year, but the pandemic interfered with that,’’ Meadows said. “It’s always good to meet with students and hear their concerns and questions. Also, it’s a good time for students to get some free pizza.”

Students chowed down on Papa John’s pizza while Meadows took questions, many submitted in advance.

Their questions ranged from queries about faculty grading scales to questions about COVID-19 vaccinations.

Another question to Meadows asked about his favorite memories at PSC.

“Graduation, that’s my happiest time,” he said. “It’s a wonderful opportunity to celebrate the achievement of our students. That’s the best time for the college president – any college president.”

Click here to submit your questions for the next “Pizza With the President” session.