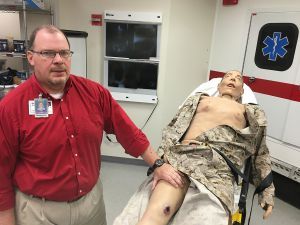 First off, the Pensacola State College EMS program’s new test subject isn’t a mannequin. It’s a manikin, which is designed to simulate the human body, while most mannequins have largely featureless body parts and are designed to show off clothes or hair styles.

And the EMS program’s new manikin is top of the line. Not only does it have realistic body parts, it has the capability to bleed, breath, speak – in English and Spanish – show a pulse and more.

“I saw a demonstration at a symposium and I’ve been trying to get one for the last for years,” said Don Lee, Director of the PSC EMS program. “It has so many capabilities. You have to ask yourself ‘What can’t it do?’”

“If you push on the chest, you can hear the air leaving,” Deluca told the PSC duo, as he pressed down on the chest. “And now, if I cut off his carotid artery…”

TOMManikin is manufactured in three models – basic, blast and gun shot wounds. PSC has purchased the gun shot wounds model, which features realistic wounds, including a sucking chest wound and a wound to the groin. All models weigh between 150 and 170 pounds and feature quick replacement extremities. TOMManikin’s have internal bladders that store more than a gallon of simulated blood.

They are also equipped to speak and can vocalize to EMS personnel, including students, aspects of their injuries. They can be controlled by wireless remote and even are fitted with external teaching headsets where instructors can speak for the TOMManikin.

“I can basically wear the headset and talk for it,” Lee said. “The students won’t even see me.”

There are many ways the manikin can be used.

“I won’t have to tell students to look for arterial bleeding,” he said. “I can place it around the corner so they can find it and stop the bleeding in a real work environment. I won’t have to say a word.”

The TOMManikin is known for its durability and is constructed of silicone and welded steel. Its extremities can withstand up to 6,000 pounds of pressure. They can be used for emergency procedures ranging from tourniquet application to airway management.

Deluca said he has seen them go through all sorts of abuse.

“I’ve dropped them off rappel towers,” he said. “I’ve watched them fall out of helos and get launched out of vehicles.”
Lee said that their durability adds to their value to the program.

“They’ve got a robust chassis on this thing,” Lee said. “If the Israeli military can use it and not tear it up, you know it’s tough.”

PHOTO: Don Lee, Director of the PSC EMS program, with the TOMManikin