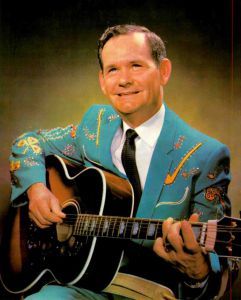 The documentary, “Hank Locklin: Country Music’s Timeless Tenor,’’ is nominated in the “Documentary Cultural” category along with three other films – all from South Florida.

“It’s very exciting,’’ said WSRE’s Mary Riker, the film’s producer. “Even though Hank Locklin is well-known and appreciated among many in country music, there are so many who just don’t know about him or who he is.”

The film was directed by James Roy. Emily Hudson Mitchell was associate producer, Ted King was assistant director and Tracey Burgess created the graphics for the film, which includes interviews with country legends such as Dolly Parton, Vince Gill, Dwight Yoakam and more.

“Hank Locklin: Country Music’s Timeless Tenor” premiered in fall 2020. In May 2021, the documentary won a gold 2021 Telly Awards for “Excellence in Video and Television Production.”

The Telly Awards honor excellence in television from all 50 states and five continents.

Locklin was born and raised in rural McLellan in the rural north end of Santa Rosa County. He even released an album in 1972 titled “The Mayor of McLellan, Florida.” He was given the moniker by famed country music disc jockey Ralph Emery because of Locklin’s decision to remain in Northwest Florida rather than relocate to Nashville once he had achieved success.

Locklin is best known for hits such as “Please Help Me, I’m Falling,’’ “Send Me the Pillow You Dream On’’ and “Let Me Be the One.” He was a proponent and practitioner of the “Nashville Sound,’’ which smoothed country’s rougher honk-tonk tendencies adding a lusher, pop-oriented sound.

Financial funding was provided by grants from the 2019 documentary “Country Music: A Film by Ken Burns,” and, locally, the Bear Family Foundation and many other donors.

WSRE is a PBS member station licensed to the Pensacola State College District Board of Trustees.

The next screening of the documentary will be at 2 p.m. Nov. 7 at the Frank Brown International Songwriters Festival, which is a multi-week event across the Gulf Coast. The Hank Locklin documentary will air in the Flora-Bama Lounge on the Florida-Alabama border of Perdido Key.