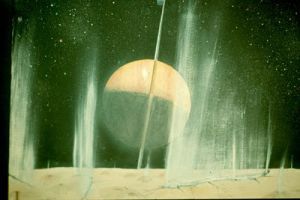 It doesn’t look like a spaceship, but the large lecture hall, Room 1590, in Building 15, will zoom you through the galaxy via “When Worlds Erupt,” the space art of Merry Edenton-Wooten.

This exhibition is an intriguing collection of oil paintings she produced in1986 that explore the possibility of eruptions on various celestial bodies.

“We were going to have a planetarium show of ‘When Worlds Erupt’ and I had to imagine eruptions or lava flows or vents spewing material in order to have worlds erupting,” Edenton-Wooten commented about the impetus for her images.

“I made it all up for the show, because there were no NASA images to go by. These worlds could not be seen with a home-based telescope. I had nothing to use but imagination based on where they were located in space, and what might possibly happen internally and externally to shape the surface and cause eruptions that may constantly alter the surface area.”

Edenton-Wooten’s work shows not only the state of 1980s knowledge of volcanism around the solar system, but also artistic predictions on what future activity would be discovered by NASA and European Space Agency missions such as New Horizons, Dawn, Rosetta, Juno and Cassini. In fact, these space missions have verified the accuracy of Edenton-Wooten’s artistic prophecies.

“I was greatly surprised to learn that the features that I imagined (on Enceladus) actually exist where I envisioned them,” Edenton-Wooten said. “It was fantasy until it had actually been proven accurate by the Cassini mission images much later.

“I made it all up. The fact that I got something correct on each of the worlds – finally verified by actual photos of landscapes – is freaky beyond measure…especially my Venusian Volcano with lightning in the eruption.”

The exhibition is free and open to the public 4-8:30 p.m. Monday-Wednesday, 1-8:30 p.m. Thursday and 9 a.m.-4 p.m. Friday. Exhibition booklets providing background on each of the worlds are available to enhance self-guided tours.