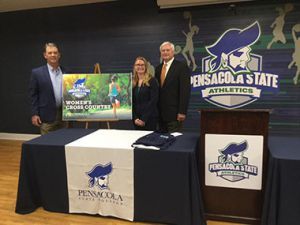 Hamilton also introduced Julie Burger as the team’s coach. Burger, an experienced triathlete, is director of the College’s Pharmacy Technician Program on the Warrington campus.

Recruiting will begin immediately for 10 scholarship positions on the cross country team, Hamilton said. There also will be five or six walk-on slots available.

“We plan to start recruiting locally – Dec. 1 was signing day, but we believe there are still high school athletes out there,” he said, adding the cross country team would participate in local and regional meets.

“The 10 to 12 student-athletes who will make up the College’s cross country team will be high-achievers with great begin-and-finish rates, high GPAs and graduation rates,” Meadows said. “Their parents will be involved, and these young ladies will be good alumni. We are expecting great things from the program and are proud to be able to help these athletes begin their journeys.”

Burger, a four-year faculty member, pledged to do her best to ensure the women’s cross country program is beneficial to the student-athletes and the College.”

“We have a very successful athletics program, and I am excited to be part of the new addition. The running community in Pensacola is very active, and I am looking forward to having some talented young women join our cross country team,” said Burger who has participated in Mexico’s Rocky Point Triathlon, Tempe International Triathlon and Lake Pleasant (Arizona) Triathlon.

“In all the places I have lived this is one of the most beautiful to train ─ and train we will,” Burger said.

Hamilton said it has been 22 years since the College added a women’s athletic program – a volleyball team joined the lineup in 1997. However, he noted discussions have been going on since 2012 about the matter.

He said after careful consideration, it was decided a women’s cross country team would be the best fit for the College.
Burger added she wants to recruit young women willing to work hard at their athletic pursuits and studies.

“Pushing limits and your own abilities is part of the student experience, and I am excited to lead the women of cross country in their endeavors.”