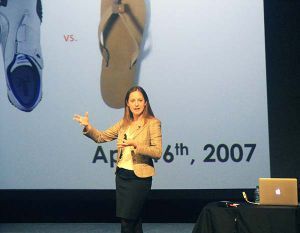 The morning of the Virginia Tech Shooting, Kristina Anderson wore closed-toe shoes and was late for her French class in Norris Hall.

Nearly 10 years later, Anderson who survived three gunshots in the deadly April 16, 2007, mass shooting realizes those random acts saved her life. On Monday night, the nearly 30-year-old shared her personal experiences when she spoke at the Jean and Paul Amos Studio as a part of Pensacola State College’s Campus Safety Month activities.

“…With a positive attitude, it is possible to survive something like this,” said Anderson, then 19 years old, as she recalled the shooting when 33 Virginia Tech students, faculty and the perpetrator, Seung-Hui Cho, died and 17 others were injured in two separate shootings.

As a result of her own experience, Anderson has founded the Koshka Foundation for Safe Schools, a non-profit that provides training on the prevention of school and workplace violence, education on active shooter preparedness and consultation on post-crisis recovery.

Looking back on that Monday morning, Anderson said after hearing commotion outside the classroom, her professor looked into the hallway and said for someone to call 9-1-1.

“It was 5 to 7 seconds, it happened incredibly fast,” Anderson said of the first shooting where she was struck in the back. The gunman would return several times to the classroom looking for survivors. Anderson was shot each time he came back.

“He was quick, methodical. He doesn’t say anything, he just goes down the row … The second time he shot above my head and I looked up. He shot me again.  I’ve asked myself, ‘Why did I look up?’”

Anderson’s third wound was the result of a bullet that ricocheted off an object and hit her toe. She credits her closed-toe shoes with minimizing that particular injury. And she said because she and a friend were late to class, she sat farther away from the door and had time to crawl under her desk.

“He fired 174 rounds that morning, 61 were in my classroom,” Anderson said of the incident.

“We were living in Japan when the tragedy occurred and wanted to come out tonight to hear Kristina and show our support,” Bill Ouilik said. “She really touched us and exemplifies the Hokie spirit.”

Anderson would eventually return and graduate from Virginia Tech.  Her testimonial was among the first events already held in observance of Pensacola State’s Campus Safety Month. The month-long observance began March 1 with a Law Enforcement Panel and Lunch where local law officers along with Pensacola State faculty answered questions. Other events have included a safety workshops and demonstrations at Pensacola State campuses and centers. Other events are scheduled throughout March. 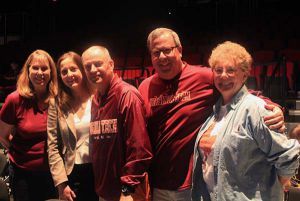