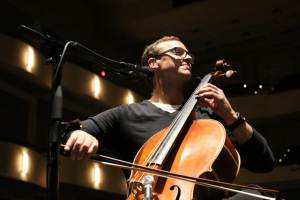 A classically trained musician with a deep technical command, Sollee has earned accolades for incorporating elements of folk, bluegrass and R&B into his singular musical style.

The Kentucky native has been described as a relentlessly curious musical soul for whom change constantly comes. His genre-bending talent ranges from composing and performing music for ballets, films and stage to concerts at Carnegie Hall and tours throughout the United States and Europe. He even cycled 5,000 miles by bike, towing his cello “Kay” behind him as part of the “Ditch the Van” tours.

Following a performance at the Lincoln Center’s American Songbook series, the New York Times remarked how Sollee’s “…meticulous, fluent arrangements continually morphed from one thing to another. Appalachian mountain music gave way to the blues, and one song was appended with a fragment from a Bach cello suite, beautifully played.”