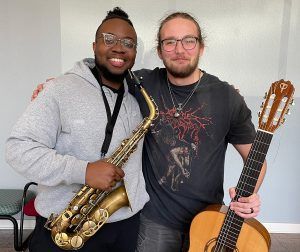 Baldwin is a first-year PSC student who has been playing saxophone since sixth grade.

“I heard jazz music when I was young and it just clicked,” he said, adding that he loves old school jazz artists, including favorites like Cannonball Adderly and early Miles Davis. “I want to cover the world in old school jazz music.”

Swanson had been playing bass for more than a decade when he had what he calls “an epiphany.”

“I was playing chords and stuff on bass and thought ‘Why not just play guitar?’”

He said he picked up bass years ago because his father had a bass.

“I started playing bass because it was there,” he said. “But I’m more of a guitarist at heart.”

Both Baldwin and Swanson are members of the PSC Jazz Band.