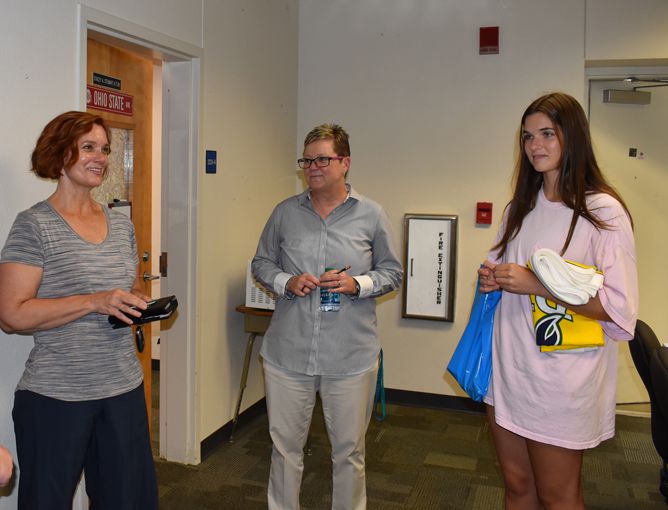 But the drive was worth it for Huntsville resident Lily Berg and her mother, Cate Berg, who made the trip to attend the PSC Pirate Open House at the Warrington campus on Tuesday, July 19.  (Lily even won a swanky PSC beach towel for making the longest journey to attend the Open House).

“I’m interested in the radiography program,’’ said Lily, who will start her senior year in high school next month. “I’ve been doing a lot of research on different programs and I know (PSC) has a really strong program. I like Florida and want to live here, so I really wanted to check out the College.”

Cate Berg grew up in Pensacola and was already familiar with the College’s reputation.

“It’s a good school and it’s very affordable,’’ she said. “That’s a big plus. It seems like a really great campus.”

The Bergs were but a few of the folks who showed up for the Pirate Open House to learn more about what PSC offers and to explore the Warrington campus, which is home to the College’s Health Sciences Department, Nursing program. Students at the Warrington campus are seeking degrees and certificates in fields such as Dental Hygiene, Electrocardiograph Technician, Emergency Medical Services, Paramedic, Pharmacy Technician, Phlebotomy Technician as well as Nursing, Veterinary Technology and general education courses.

Jon Stephenson, PSC Associate Vice President of Student Affairs, urged the visitors to explore the numerous stations set up in the Harrison Student Affairs Building on the Warrington campus, where students and prospective students could get information and assistance in admissions, financial aid, scholarships, clubs and student activities, veteran services, workforce programs and even mental health counseling offered at the College.

“We want to share the highlights of this campus with you and answer any questions you might have,’’ Stephenson said, before offering students some PSC swag for answering some Open House questions – “What is the PSC mascot?” and “Who drove the farthest?’’ were but a few.

Warrington campus administrators including Dean Dusti Sluder and Health Sciences Department Head Mitzi Sowell were also on hand as were many program coordinators and instructors, to answer questions and guide students on tours of the Warrington campus.

Dylan Meyer starts the PSC Nursing Program when the fall term begins Aug. 15. He had visited the Pensacola campus, but never the Warrington campus.

“I wanted to come out before classes started to get a feel for this campus and where I’ll be going to school,’’ said Meyer, who had been working as a hospital patient care technician before deciding to enroll in the PSC nursing program. “I have heard it’s a really good program, so I’m nervous. But I’m excited.”

PSC’s Nursing Program is consistently ranked as one of the best in the country and state.