Student Veterans Association members, like us all, were forever affected by tragedy of 9-11 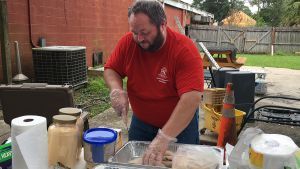 In a back patio behind the Hanniton Watts’ American Legion Post #193, Pensacola State College student Dustin Reddin spent the early-afternoon of Sept. 11, 2020 frying up some catfish.

“I had already made up my mind to enlist,” Reddin said. “I had a grandfather in the Army and my Dad was a Marine. It was kind of a family thing and I wanted to carry on with that tradition. I guess you could say I was born into it.”

The SVA held a Patriot Day – as 9-11 is now known – fish-fry fundraiser on Friday to raise money for the organization. The group fried and delivered fish to staff who on the Pensacola campus who had pre-ordered the meals. The SVA also sold meals from the parking lot of the American Legion Post on 12th Avenue.

“We do it today because today is Patriot Day,” said John Woods, an Air Force veteran and the PSC Veterans Upward Bound coordinator. “It has meaning for those of us who have served either in the military or law enforcement or the medical field or the fire department.”

“It has meaning for all Americans.”

“It’s something I don’t think any of us will ever forget,” said Reyes, an Army veteran who is the SVA secretary. “It had a profound impact on us all. Everyone had a sense of uncertainty about what could be next or who would be next. There was so much suffering. And it still has an impact on us now.”

Pensacola State College salutes all active duty military personnel and veterans, as well as our nation’s first responders. Thank you for your service.