Storm relief goes on at PSC 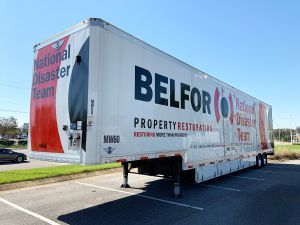 Belfor crews could be on campuses for months

Outside the Louis A. Ross Health and Sports Center on the Pensacola State College Pensacola campus, a handful of hard-hatted carpenters are constructing wooden floor segments for the gymnasium.

No, the parquet gym court floor doesn’t have to be replaced. In fact, the new floor will go over the old floor to help ensure it won’t have to be replaced. Because the gymnasium needs a new roof after Hurricane Sally, and the new floor – 4 feet higher than the gym floor ─ will be covered in plastic to catch any leaks during roof construction, which should begin next week.

“Those floors are expensive to replace,” said Diane Bracken, the College’s Director of Facilities. “So they’re building a floor on top of the floor with plastic across it and up the walls to collect any water, like a big swimming pool.” 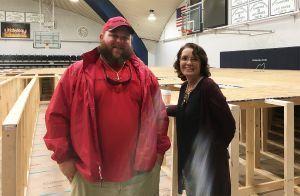 Diane Bracken, right, PSC Director of Facilities, with Cody O’Connor Belfor Senior Project Manager in the gymnasium of the Louis A. Ross Health and Sports Center. The raised platforms are part of a system for protecting the gym floor during construction of a new roof.

That’s just one of the on-campus storm recovery projects being operated by Belfor Property Restoration, which is using the College’s Pensacola campus as its Northwest Florida Hurricane Sally headquarters. Belfor is using the parking lot in front of the Lou Ross Center as its base of operations and it is there where the Belfor Mobile Command Center is located, as well as numerous warehouse trailers holding everything from dehumidifiers and gas cans to large fans and even yard tools such as rakes and shovels.

Belfor has about 110 employees and subcontractors working on all PSC properties, and about 400 total employees working on recovery projects across Northwest Florida.

Also on PSC campuses are workers and arborists from Cordwin Tree Service, a Central Florida company. The company has cut and cleared trees toppled by Hurricane Sandy, as well as damaged trees determined to be potential threats.

Bracken said the tree crews should be finished this week. But Belfor and its sub-contractors will be part of PSC’s landscape longer.

Both Bracken and Belfor Senior Project Manager Cody O’Connor said it could be three or four months before crews are finished with storm mitigation work, which includes repairing numerous roofs, taking out damaged drywall and installing new drywall and replacing ceiling tiles in buildings throughout the campuses and centers. For the Downtown Center that received heavy damage, the recovery work might take six months.

“We have teams here (Pensacola campus), at the Warrington and Milton campuses, and the Downtown Center,” said O’Connor, who is based out of Tampa. “We have people here from all across the country working hard every day.”

The parking lot in front of the gymnasium has been fenced off and is currently used only by Belfor. But people can still use the tennis courts, gym, pool, track and disc golf courses if they park elsewhere.

“The storm definitely took a toll,” Bracken said. “More so than you would have thought.”