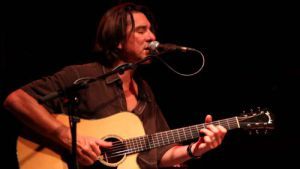 Best known as the co-founder of Drive-By Truckers along with Patterson Hood, Cooley has proved his mettle as a master songwriter, singer and guitarist whether solo or with a band for more than 30 years.

After spending much of his young life scrapping in the rock ‘n roll trenches, Cooley has become one of the best composers of his generation. Not shying away from current issues, his lyrics can be outspoken and hard-edged, yet always finely honed.

Whether performing solo or with Drive-By Truckers, Cooley has been featured by national media such as Rolling Stone, New York Times, National Public Radio and CBS Morning News. Touring extensively with DBT, Cooley offers limited solo concerts and has included Pensacola State College before he heads to California for engagements in San Francisco, Los Angeles and Mill Valley.