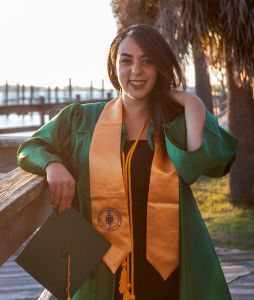 When Miriam Villa first moved to the United States in late 2017, she was worried about her English language skills.

But the German native enrolled at Pensacola State College the next spring, and became one of the college’s model students, even serving as a leader in the PSC chapter (Theta Chi) of the Phi Theta Kappa honor society.

Villa – who now speaks perfect English – graduated from PSC in fall, 2019, and was recently selected as a 2020 Coca-Cola Academic Team Gold Scholar.

She received a $1,500 scholarship from the Coca-Cola Scholars Foundation to continue her education at the University of West Florida, where she is currently enrolled and studying Biomedical Sciences in preparation for an eventual career as a dentist.

Villa is just a few months removed from PSC, but still credits the college with any success she has garnered.

“Pensacola State College was such a wonderful experience,” said Villa, a married mother of one who met her husband while he was serving in the U.S. Army in Wiesbaden, a German city near Frankfurt. “I think what really stood out for me about PSC is the support system. There is so much help available for students. Almost every day I was in the Math Lab and I spent a lot of time in the Writing Lab. The staff and instructors really want to help you succeed. They give you encouragement and want you to learn. That’s something I always appreciated.”

Students are nominated for the academic team by college administrators and selection is based on academic achievement, leadership and engagement in college/community service. Besides being involved with PTK, Villa was also a student tutor. Off campus, she volunteered for numerous groups, including the American Red Cross and local animal shelters.

“I don’t know how she has enough time for everything she does,” said Jeff Wooters, PSC PTK adviser. “Everyone who receives the (Coca Cola Scholars) award has a high-grade point average. But what sets her apart is she is so well-rounded. Yet she has her own very busy life with a son and a husband.
And she came to the United States and English wasn’t her primary language, so she had obstacles to overcome.”

Others at PSC are equally impressed.

“She’s probably one of the most dedicated students I’ve seen over the years,” said Michael Sabroski, PSC Math Lab supervisor. “She was the one student we would always see in here.”

And while Villa came to the Math Lab to hone her skills, she ended up helping others, Sabroski said.

“She would organize study sessions with her classmates,” he said. “So she not only put in the time, she also wanted to help other students. She was just fantastic.”

Villa said it was instructors and staff like Saborski that differentiates PSC from other colleges and universities. (She also singled out chemistry professor Bobby Roberson, algebra teacher Patrica Horacek, English instructor Britni Schoolcraft and her academic adviser, Kathy Dutremble as people who helped her succeed at PSC.)

“All of my instructors and advisers helped me whenever I was struggling,” Villa said. “They helped me not just with my academic development, but with my personal development.”

Villa studied dental assisting when she was in Germany, but soon her ambition made her realize she could do more.

“I would see the dentists and think ‘I can learn to do that’,” Villa said. “I knew I wanted to do more than just assisting.”

Now the 26-year-old hopes to finish at UWF, then go elsewhere to study dentistry.

“All the confidence I have now really came from my success at Pensacola State College,” Villa said. “It was such a good experience. There was a lot of work I needed help with, but everyone at PSC was helpful and wanted me to succeed. It’s not like that everywhere.”