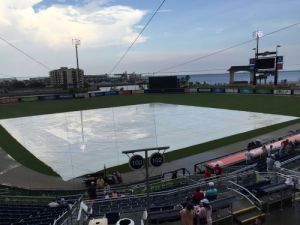 A picture may be worth a thousand words but a video turned out to be a home run for the Pensacola State Pirates baseball team.

The Pirates beat out baseball organizations from Arizona to Georgia to win a field tarp from the Pensacola Blue Wahoos. The Blue Wahoos received a new tarp for its seventh season, and held a video contest to find a home for the old one which was still in good condition.

The 30-second video had to be posted to the baseball team’s Facebook page with the Blue Wahoos being tagged in the post. The contest ran from late February until March 2.

“It was raining the day the Wahoos announced the contest, the little canoe was over in the maintenance department and one of our players had a fishing pole in his car – so everything came together perfectly,” he said.

On Wednesday, March 14, the Pirates picked up the 170-foot-by-170-foot tarp from the Blue Wahoos. It will be used to cover the field when it rains during games and practices.

“We’ll be able to play more often and if there are periods of heavy rains during practices, the field won’t get soaked and we’ll be able to practice more,” said Lewallyn who added baseball games usually get rained out about five or six games a season.

Ricki Stewart, community relations and public relations manager for the Blue Wahoos, said they were flooded with emails from across the country.

“We believed the Pensacola State video was the best one,” she said of the 10 video submissions. “First, the baseball players shot the video on their flooded field so they showed a need for the tarp, and they followed the directions. We specifically said a 30-second video and that is what Pirates submitted.”

She added the Pensacola State team also posted the video on its Facebook page and tagged the Blue Wahoos.

“Not everybody did that and when the Pirates did, we were able to share the video on our Blue Wahoos Facebook page too,” Stewart said.

The Pensacola State players were very excited to win the tarp and look forward to using it.

Rulli, a catcher who portrayed the fish in the video, said he and teammates felt the video was a winner.

“We knew we had a good video and we had fun shooting it,” said the 19-year-old Tampa native. “We wanted it to be different and it seems everything fell into place for us that day – it was raining, we had a canoe and a great idea for a video.”

Bryant, a pitcher, said not winning the field tarp was never an option.

“We really wanted the tarp, we needed the tarp so we just had fun and did it,” said the 18-year-old Thomasville, Alabama, native. “When we heard that we were the winners, we were so excited. Having this field tarp would mean no more rainouts for us.” 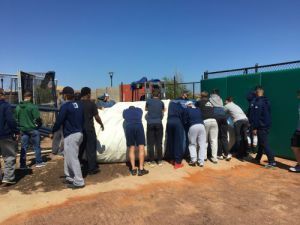 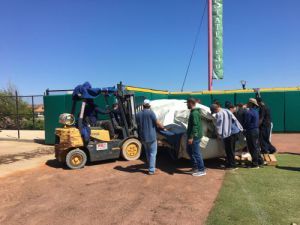