PSC’s Women’s Basketball brings in postseason honors, including Assistant Coach of the Year 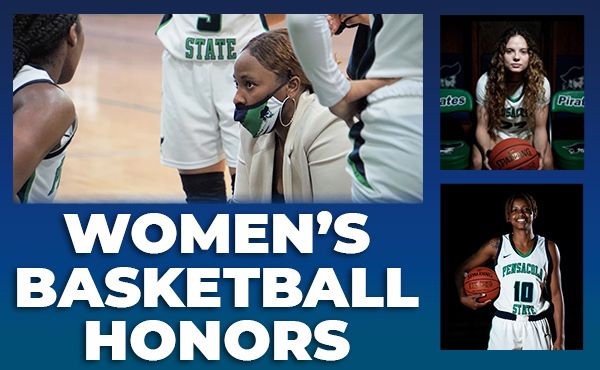 Barnes has coached at PSC for eight years. She was an All-American at Seward County Community College during her sophomore, where current PSC women’s basketball head coach Penny Belford was her assistant coach. It was Barnes’ tenacious play and “will to win” which prompted Belford to bring Barnes to PSC to help her lead the Pirates.

“When I started at PSC, I knew I wanted someone to model and show our players what I look for on the court,’’ Belford said. “She was consistent, played tough and aggressive. If there was a loose ball, she was going to get it.”

Barnes said she was humbled to be named Assistant Coach of the Year.

“It’s a nice honor,’’ said Barnes, who went on to finish her collegiate career at Providence College. “Just working under (Coach Belford) has been a learning experience. I enjoy just working under her and trying to perfect her goal for the team.”

Eventually, Barnes would love to be a head coach herself.

“I love Pensacola State and I love Pensacola, but the end goal is to be a head coach, whether that’s at a junior college or at the Division I level.”

Porchia, a forward, has committed to Troy University, which is led by former PSC head coach Shanda Rigby.  Porchia averaged 14.7 points and 9.6 rebounds a game during the 2021-2022 season.

“She could have gone to play Division 1 last year,’’ Belford said. “But she wanted to come back. She really put in the work to get better and she had an outstanding year.”

Williams recently committed to play at the University of Massachusetts. Playing guard, Williams was the team’s sharp-shooter, averaging 38 percent from 3-point range. She also averaged 13.4 points per game.

“She’s an unbelievable shooter,’’ Belford said. “But she also improved her overall game this season and made a lot of progress.”

Both Porchia and Williams said playing for PSC has made them better at the game they love.

“PSC helped me develop as a player,’’ Porchia said. “I worked on little things to get better that I might not have done on my own. PSC made me better overall.”

Williams said that while she is still primarily a long-range shooter, her overall game also developed at PSC.

“On the west coast, we don’t play a lot of defense’’ she said. “But here you have to have physicality and toughness. My overall game definitely improved.”