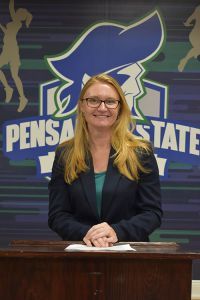 “The profession changes so quickly, so I just did that to stay relevant,’’ Burger said from her office on the PSC Warrington campus. “I’d work a shift maybe once a month.”

It’s that kind of commitment to profession that led the Florida Pharmacy Association to select Burger as the 2019 Florida Pharmacy Technician of the Year. Of course, she then stopped her Walgreens work. Not because she had a big head or anything. But because PSC has tasked her with another big job.

“Yes, I’m staying busy,’’ Burger said during a tour of the pharmacy technician lab. “Something had to give.”

Julie Burger is the new PSC cross country coach. She's also Florida Pharmacy Technician of the Year. PSC is fortunate to have her teaching and coaching!

Burger is in her fourth years as program director, and said there is a “huge need” for pharmacy technicians both nationwide and locally.  According to the U.S. Bureau of Labor Statistics, there is an expected 12 percent growth in the pharmacy technician field through 2026, which the Bureau classifies as “faster than average.”

Pharmacy technicians perform numerous job duties, including assisting pharmacist in dispensing medications and other health care products. They also do compounding of medications and numerous other tasks.

“We assist the pharmacist in all things,’’ Burger said, “including dispensing medications.”

Burger’s students are also trained in working in sterile environments and working with chemotherapy patients and those who need IV nutrition.

Many of Burger’s graduates have found quick work in the profession. Sometimes, they’re hired even before finishing school.

Danielle Suggs graduated from the program this spring. Toward the end of the students’ studies, they spend eight weeks doing clinical work in an actual local pharmacy.

“They wanted to hire me before I even finished,’’ said Suggs of her hiring at DuraMed Pharmacy in Escambia County. “I told them I don’t graduate until May. It was March.”

They hired her as a cashier until she would graduate two months later. Now, she’s a pharmacy technician at the business.

“Julie really helped us prepare for the workplace,’’ Suggs said. “You leave PSC with the confidence and knowledge you need to succeed. Julie was the most hands-on college instructor I’ve ever had. She was always willing to talk to you and really worked hard to make you understand what you needed to know. She gave me a lot of confidence.”

She has lobbied at the state level to push for more responsibilities for pharmacy technicians, who aren’t allowed to dispense flu shots or counsel patients.

“We’re pushing for more expanded roles,’’ Burger said. “There’s more we can do.”

Burger even takes her students to leadership and professional conferences where issues such as job duty expansion are often discussed.

“I take them to a bunch of pharmacy conferences so they understand the profession as a whole and what they can do to help the profession in the future,’’ she said. “You need that kind of leadership if you’re going to be vested as a career option.”

And now she has another job to add to her resume – women’s cross country coach.

Burger was named cross country coach in May. The team starts its competitive season in September.

“I’ve always been a runner,’’ said Burger, who ran track and cross country in high school. “I did triathlons on my own and road races here locally.”

The inaugural team has eight members.

“I’m excited about it,’’ Burger said. “We practice Monday through Friday. We have 13 different trails we meet at and run.”  They also run on the soft sands at Pensacola Beach.

“We run at the beach a lot,’’ she said. “Running in the sand is very humbling.”

For details on the PSC pharmacy technician program, go to https://www.pensacolastate.edu/academic-programs/phrm-atd/.

For the PSC women’s cross country schedule, go to http://athletics.pensacolastate.edu/sports/wxc/index.