PSC’s first ‘Juneteenth’ event is a celebration of freedom 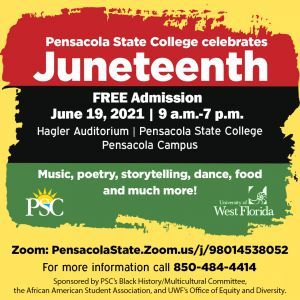 On July 4, the United States will celebrate its independence from Great Britain with fireworks, barbecues and everything red, white and blue.

But to say it’s a celebration of freedom is only partially true. Because when the nation was formed in 1776, there were tens of thousands of enslaved people in the new country.

True freedom for all Americans would come with President Abraham Lincoln’s Emancipation Proclamation in 1862, though news of that freedom was slow to spread to some parts of the still-young country.

In Texas, the news of freedom didn’t come until 1865 when Union Army Major Gen. Gordon Granger and his soldiers arrived in Galveston, Texas, to read General Order No. 3, informing residents that slavery had been abolished.

The date was June 19. There were an estimated 250,000 enslaved people in Texas at the time.

Celebrations arose and commemoration of the historical day began a year later in churches across Texas. Juneteenth – a true celebration of independence and freedom ─ was born.

Pensacola State College will celebrate Juneteenth on Saturday, June 19, on the Pensacola campus. Events include music, poetry, theater performances and so much more. The event takes place from 9 a.m. to 7 p.m. in the Hagler Auditorium, Building 2, and the Delaino Student Center, Building 5.

“It’s a celebration,” said Tonie Anderson-Steele, a Milton campus counselor and adviser to the PSC African American Student Association, which is sponsoring the event along with the PSC Black History/Multicultural Committee and the University of West Florida’s Office of Equity and Diversity. “It’s not a remembrance of slavery. It’s a celebration of freedom.”

Part of the event includes Anderson-Steele and the African American Student Association’s “History of Juneteenth” discussion at 5 p.m. in the Hagler Auditorium

There are numerous events throughout the day, including a 2 p.m. demonstration of African cuisine by Chef Kimathi Robinson and the theatrical play “Harriet” – a tribute to Harriet Tubman – at 3 p.m. The Juneteenth Grand Finale at 5:30 p.m. will feature poets, musicians, vocalists and dancers. One event will be on Zoom only – a short presentation on the History of Afrocentric Drumming by Duke University music instructor Bradley Simmons.

“COVID-19 took a lot out of everyone,” said Anderson-Steele. “This is a great way to reunite as a College and community and to celebrate something that is important to our history. It’s for all people, not just a group of people. This is a celebration for everyone.”