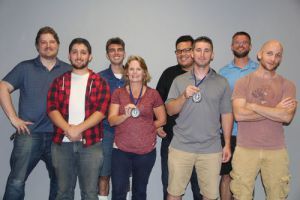 This is the second year Pensacola State has placed at or near the top in the competition. In 2016, the college’s cybersecurity team won first place at the ITEN competition.

Pieknik, the team’s captain, said despite having less time to complete the challenges this year, the competition was a lot of fun and the team performed exceptionally well.

“I attribute our success to the fact that each team member has a specialty – this allowed us to focus on detection and mitigation during the competition,” Pieknik explained. “It was a lot of fun, and we especially like going up against our rivals over at UWF. They are a formidable opponent and we just want to officially congratulate them on this year’s win.”

Carter, a network engineer and cybersecurity specialist with the U.S. Department of Defense, said she was extremely proud of the PSC team’s performance.

“They really showcased their technical skills during the competition. These guys had to learn a new software – Vyatta and the firewall, pfSense – which were unfamiliar to me as well,” she said. “However, they had the knowledge and the skills to learn the software and keep the stalker out of the network.”

The PSC team will next participate in the National Cyber League preseason games set for Oct. 20-28. The league provides a cybersecurity training ground in a high-fidelity simulation game environment. The league also provides higher education institutions with free curricula to help students prepare for events and professional certifications.

“We understand that in a field as dynamic as cybersecurity many of our students learn best through doing ─ rather than observing, which is why it is so critical that curriculum includes hands-on practical experience,” he said. “When these team members go to competitions, that practical experience really shines through and helps them be successful.”