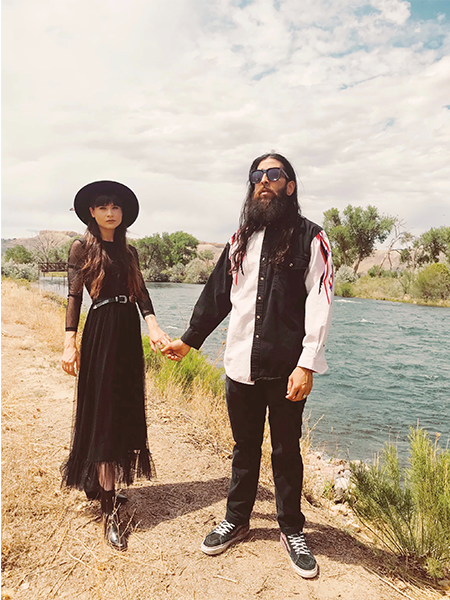 By day, Brett Patterson helps some of our community’s most vulnerable folks attend Pensacola State College.

By night, Patterson jams with his wife Lee Patterson as the musical duo Snake and the Rabbit ─ a well-seasoned outfit that will likely find a way into regional music venues once the couple is a bit settled in Pensacola.

Patterson is the new director of the PSC Eldon L. Norman Education Opportunity Center (EOC) and is only three weeks into the job. A TRIO program funded by the U.S. Department of Education, the EOC assists low- and modest-income and/or first-generation college students enroll in a postsecondary institution or to return after a period away.

“I think it will be rewarding,’’ Patterson said. “My position is going to be more outreach-oriented. Where other (recruitment) programs go to high schools and middle schools, we’ll be reaching out to career service organizations, housing agencies and unemployment offices.”

Patterson has plenty of postsecondary experience. Most recently, he was an account specialist at the University of Colorado in Colorado Springs. He also has served as an Academic Advisor at Arizona State University, a Senior Student Services Specialist at the San Diego State Community College District, a faculty advisor at Envision EMI in Virginia, Lead Admissions Counselor at Ashford University which is now University of Arizona Global Campus.

He is also the owner of Patterson Productions, a marketing and production company he started in 2014.

It’s that kind of experience that makes Patterson a great fit for the job, said Debbie Douma, PSC Dean of Grants and Federal Programs.

“Brett comes to us with a variety of postsecondary experiences,’’ she noted. “His business and marketing experience will also help to increase our outreach into the community.”

He and his wife Lee, a former solo artist, have been playing music together – she plays guitar and he plays guitar, bass and few other instruments – since 2010, sometimes with numerous backing musicians. They stripped down to a two-piece act in 2018.

They’re another in the proud line of renegade songwriters and performers who work in the realm of the mythical “Cosmic American Music” milieu first envisioned by country-rock pioneer Gram Parsons.

Snake and the Rabbit’s sound is off-kilter country, midnight blues, a little lo-fi, a bit of far-out folk – but not quite “freak folk” – and a little indie rock that all nods to but never mimics the storied sounds of the past.  Add in a little textured subtle psychedelia influence  – think the Byrds’ “Notorious Byrd Brothers” – and you won’t be far off from Snake and the Rabbit.

If you want to learn more and hear the band, go to www.snakeandtherabbit.com. You can also find the duo’s music on Spotify.