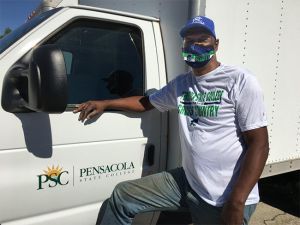 Richard Whatley does his job, sure. The Pensacola State College truck driver is the fella to call if you need something moved from one building to another, or even to another campus.

Apparently, he’s also the guy to call if you need a cross-country course set up quickly.

Whatley, 61, has been with PSC for about 18 months, hauling everything from office furniture to books and even food supplies for the PSC Pirate Pantry.

But in October, Whatley was out at the College’s picturesque Milton campus putting pink marks on tree roots on the ground. Whatley, a familiar presence in the youth track and field culture in Pensacola, was marking out the route for the new 3.1 mile cross-country course that the campus now has. In fact, the course was Whatley’s idea, conceived when he learned the 49th Annual Washington High School Wildcat Invitational was looking for a new course to hold the cross-country meet.

The cross-country route runs through the Milton campus disc golf course, but the entirety of the course had to be marked. Whatley and Washington High cross-country coaches also trimmed back branches and cleared the course of obstructions for the runners.

Not only was the course used for the Wildcat Invitational, it is now a training course for the PSC cross-country team, which just finished its second season. PSC currently only has a women’s cross-country team.

“I’d love to see a men’s team here,” said Whatley, whose son Richard Whatley – he’s not “Jr.” because of different middle names – was a Pine Forest cross-country runner and is now a freshman student-athlete at Cowley College in Kansas. “Hopefully we can make that happen in the next couple of years.”

The younger Whatley is also one of the founders of the GOAT Farm, a nationally-ranked Amateur Athletic Union (AAU) running club in Pensacola. In 2018 at age 16, he won the popular Pensacola Bridge-to-Bridge 5K run ─ the youngest winner in the race’s history.

The elder Whatley is a single father to his son, and helped coach him at Pine Forest, where Whatley the elder still assists the team. The father also is a coach with the GOAT Farm Team.

“We’re really close,” Whatley said of his relationship with his son. “I’ve been a single parent for 18 years.”

His son said his father “means a lot” to him.

Whatley is well-known in Pensacola cross-country circles. It was through those cross-country relationships that he found out that the Wildcat Invitational was looking for a new course.

He approached PSC cross-country coach Julie Burger, and, with the administration’s blessing, got to work on the Milton campus course. He’s also using his contacts to help Burger network with area high school programs – an asset for student-athlete recruiting.

“He’s so amazing,” Burger said of Whatley. “I’d love to take credit (for the course), but it was Richard out there with the Washington coaches doing most of the work. He’s always been so willing to help us.”

Whatley, who threw the shot put and discus, as well as running track as a high school athlete, said he feels a fondness for the PSC team.

“I think they’re going to improve each year,” he added. “Coach Julie is doing a good job, and I’m trying to introduce her to as many coaches and athletes as I can. Hopefully we can continue to build this cross-country program.”