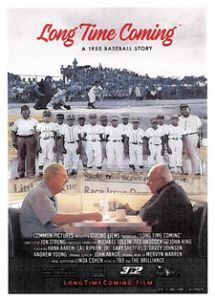 The free screening will be from 7-9 p.m. in the Jean and Paul Amos Performance Studio on the Pensacola campus at 1000 College Blvd.

The film chronicles the historical significance of the all-black Pensacola Jaycees All-Star team that advanced to the Little League State Championship in August 1955 to play the all-white Orlando Kiwanis.

The Pensacola Jaycees were named the Northwest Florida’s regional champions – after all-white teams in the area refused to play them. In one of the South’s first integrated Little League games, the Pensacola Jaycees and Orlando Kiwanis moved beyond fears and threats to break a long-held tradition.

Three former players from each team will attend Friday’s screening as well as the director, Jon Strong, and producer, Ted Haddock. There also will be a “talk back” session immediately following the movie.

For more information about ‘Long Time Coming: A 1955 Baseball Story,” contact the college’s Office of Institutional Diversity at 850-484-1759.