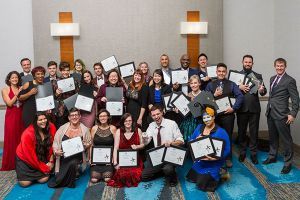 Noting the exhaustive time and effort that students put into ADDY competition entries, Hopkins said PSC students are working for more than recognition.

“These students are working toward a goal of having a great portfolio piece that will eventually help them get hired,” Hopkins said. “Graphic design and photography students face stiff competition after they leave academia, and we want them to be prepared for that in the job market.”

PSC Visual Arts Department Head Krist Lien added the ADDY Awards process is a great way for students to see how their work compares to others outside of the classroom.

“It’s not uncommon to see one of the area’s professional designers approach a student after the ceremony to talk about their work and a possible job. Our department has added several internships offered solely on the quality of student work that the professionals see during this annual event,” Lien said.