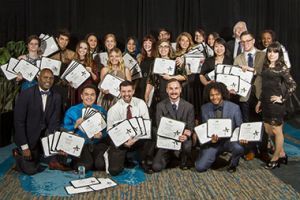 Silver ADDY winners – Zachary Blessing, Karli Kimmons, Darrian Montgomery and Hanna Peltier – can advance to the national competition, but the entrant is responsible for paying the applicable entry fee.

The American Advertising Awards, formerly known as the ADDYs, “honor excellence in advertising and cultivate the highest creative standards in the industry.”   The AAF student division of the competition is open to full- and part-time college students and student interns attending accredited U.S. institutions.

“It is such an honor to receive two gold awards,” said Bestgen, a December 2017 graduate who is a graphic designer in the college’s marketing department. “It feels amazing to be recognized for my design work, especially since I was competing against major design schools and universities in the state of Florida.”

Faculty and staff of the college’s visual arts department were proud and pleased with the students’ showing at the regional level.

“No one knows how small we are when our name is spoken loudly at that competition,” said Mark Hopkins, graphic design instructor and co-program coordinator. “They are judged by professionals in the industry, and the competition gets stiffer at every level.”

“This year, we had an extraordinary amount of winners at the local level,” said Hopkins who added the college’s visual arts department has come a long way since first competing in early 2000 ─ when only four students won awards at the local level.