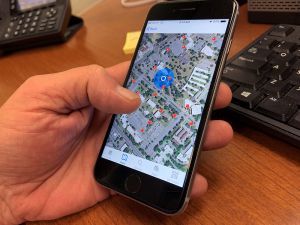 When Pensacola State College web administrator Frank Asprer first compiled the official PSC smartphone app back in the fall of 2019, he already had plans for an update.

The maps section, for instance, brought visitors to the various PSC campuses and centers, but stopped there.

“We need to make it turn-to-turn to specific buildings,” he said at the app’s original release. “That will make it a lot easier to get around.”

The thing about coders: Usually they can’t help but tweak and think of the next expansion. So Asprer immediately got to work on the existing app, adding features, refining navigation and streamlining procedures.

The result was an all-new version of the iPhone app, which should already have updated for the more than 500 users who have downloaded it since the August 2019 launch.

Those who haven’t opened the app in a while will notice that the basic cosmetics are the same – it opens with a beautiful photo of the M.J. Menge Bell Tower – and the basic button navigation structure hasn’t changed, with access to Spyglass, eLearning, PirateMail, news, calendars, student services and more.

But a deeper dive shows that Asprer has achieved some of his update goals. For instance, the Maps button (down on the new, revised bottom navigation strip) takes the user to a more detailed array of maps of the six PSC campuses and centers. Click on the Pensacola campus, for instance (labeled as “Main Campus”), and the map appears (borrowed from Apple Maps), festooned with a pattern of numbered red pins upon the various buildings. By tapping on a pin, the user is taken to detailed walking and/or driving instructions, which means there’s little chance a user can get lost, regardless of the campus.

The other major improvement is a more robust course search, allowing the user to search by instructor name, course number or section number. A student can see, via the individual results, the number of available seats in a class.

“What I’m hoping to add in the next version is a way for the user to add the class to a favorites list, which will help them when they’re compiling their schedules,” Asprer says.

As before, the app includes campus tours, a QR scanner and a simple to-do list function.

The app currently is available only in an iOS version, but an Android version is in the future, Asprer says.

See details, screenshots and a download button at: https://www.pensacolastate.edu/psc-app/.