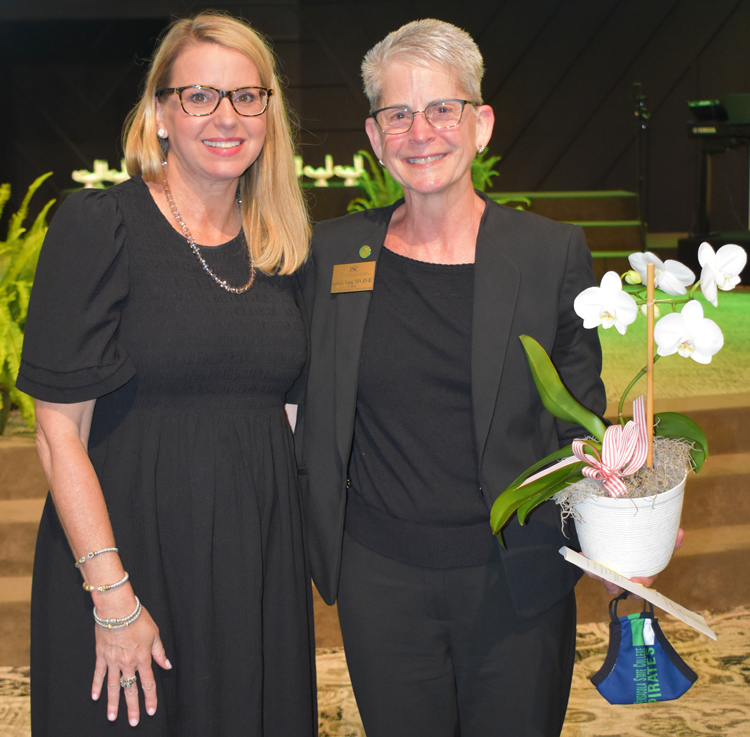 Karen Young already had more than 10 years of nursing experience when she joined the U.S. Navy Reserve as a commissioned officer in 1994.

By the time Young joined Pensacola State College’s nursing faculty in 2007, she had already served in numerous leadership positions in the Navy Reserve. Still, her greatest professional achievements wouldn’t come until she was well-entrenched at PSC.

In 2013, Young was the Officer in Charge and Clinical Director of the Warrior Recovery Center in Kandahar, Afghanistan. She spent six months in Afghanistan overseeing the care of more than 400 wounded warriors.

From 2017 to 2019, she served as Commanding Officer of Operational Health Support Unit Jacksonville, while still serving as a PSC faculty member.

“Those were the highlights of my military career,’’ Young said. “Caring for our warriors – that’s what I had always trained to do, to be able to answer the call of our country.”

Young retired from her PSC position this spring semester.

“Pensacola State College was a great place to be,’’ Young said. “At that point, I had 25 years of bedside nursing and I was able to transfer that experience forward to the next generation of nurses.”

“Karen was a leader of the nursing program,’’ said Mitzie Sowell, Health Sciences department head. “She taught the intro course to students and set the standard for what is expected. She did more than just teach. She was a role model for our students and our faculty. Karen genuinely cared about her students and one of the most organized people I ever met.”

Young’s other military assignments included serving as executive officer of the Operational Health Support Unit Pensacola, and as Senior Nurse Executive, Expeditionary Medical Facility Great Lakes One. Her military decorations and honors include the Legion of Merit, the Navy and Marine Corps Commendation Medal and the Rear Admiral Alene B. Duerk Award.

Her commitment to the military is deep. Both her parents served in World War II – her mother was in the Navy WAVES program. Her husband, Robert Young, served in the U.S. Marine Corps and, primarily, the U.S. Coast Guard, where he was a search and rescue pilot. The couple has two sons, Jacob and Eric Young, and four grandchildren.

“I went into the Navy primarily to serve my country,’’ Young said. “I also wanted to have the adventure of what the military has to offer.”