PSC retires jersey number of Carla Williams, one of the College’ greatest Pirates 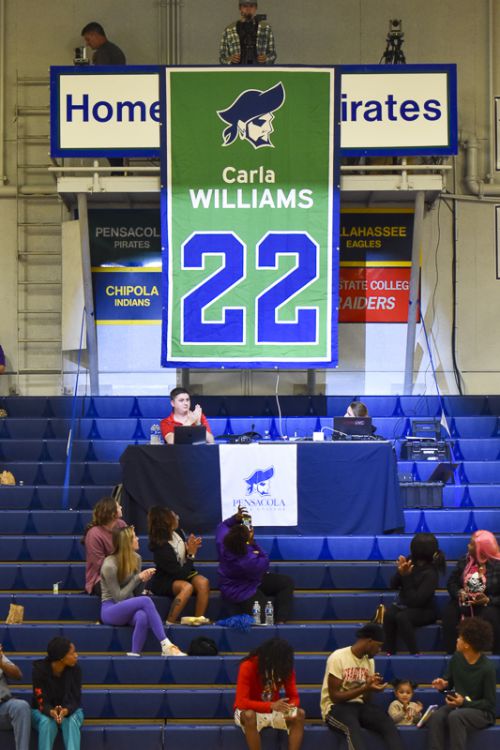 Moments later, a large reproduction of Carla Williams No. “22” Pirate jersey was unspooled from Hartsell Arena’s rafters on Wednesday, Jan. 18.

“Her number will now hang inside Hartsell Arena forever,’’ Lewallyn said. “It will never be worn by another men’s or women’s basketball player again.”

Williams jersey was retired during the intermission of the PSC men’s and women’s games against Panhandle Conference rival Northwest Florida State College.

An associate math professor at the College, Williams, 48,  died in May 2022 due to domestic violence. On Wednesday, PSC players warmed up while wearing Domestic Violence Awareness shirts to honor Williams.

Many students and fans in the crowd also wore the lavender shirts, which featured a purple ribbon and the words “Remembering Carla Williams.” Purple is the color associated with domestic violence awareness and prevention.

In September 2022, Williams was inducted into the PSC Athletics Hall of Fame. She had spent more than 24 years working in PSC Athletics, Collegiate High and the Mathematics and Computer Science Department.

An exceptional academic and athletic student at Graceville High School, Williams led the school to a state championship in 1992. She played two years at PSC, where she was selected to All-Academic, All-Conference and All-Region teams both years. After PSC, Williams played and excelled at Florida State University.

“She was loved,’’ Clara Williams said of her daughter. “All she saw was love and the best in people.”

In June 2022, a month after her death, the Carla Williams Memorial Endowed Scholarship was established at the College. Donations can be made at https://athletics.pensacolastate.edu/Carla-Williams-Memorial-Scholarship-Fund.

Today, Jan. 19, Bubba’s 33 will contribute a portion of all food sales to the Carla Williams Memorial Scholarship. The PSC Alumni Association will host a social at Bubba’s 33 from 5-7:30 p.m. to help support the scholarship effort. Bubba’s 33 is at 7001 N. Davis Highway.