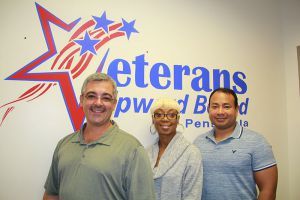 Pensacola State College has received a $1.3 million grant from the U.S. Department of Education to renew its Veterans Upward Bound (VUB) program for the next five years. This program assists 130 veterans per year as they gain skills needed to enter college and become successful students.

The program at Pensacola State is currently the only VUB program in Florida and is one of only 49 federally funded TRIO Veterans Upward Bound programs in the country.

“I had been out of high school for several years, and VUB gave me the structure I needed to prepare for college classes,” Coger said. “It also put me on the right direction for planning things like registration and financial aid.”

She completed the VUB program in summer 2016 and immediately enrolled as a PSC student majoring in social work. Coger plans to graduate next May and transfer to the University of West Florida to complete her bachelor’s degree.

Following a 16-year military career, David Smith entered the VUB program to brush up on skills he needed to pursue an engineering degree. After completing the program in 2016, he discovered that VUB also saved tuition dollars when he became a student at Pensacola State.

“I was able to take college prep classes for free through VUB. If I had entered college without taking advantage of VUB first, I would have paid tuition for the developmental classes I needed to take before starting college-level pre-engineering classes,” said Smith, who will graduate in December and transfer to UWF to complete his bachelor’s degree in mechanical engineering.

For Joshua Tallant, with a 22-year military career, VUB offers a familiar place within a strange college environment.

“The prep classes and school structure help us keep the ball rolling, but also important is that VUB puts veterans in touch with other veterans and helps us navigate the system,” said Tallant who completed VUB in May and is currently pursuing a bachelor’s degree in cybersecurity at Pensacola State.

“VUB provides continuity for veterans; a place for vets to talk about issues they face with other vets who have been there. By mid-day, our area is full of veterans studying, working and talking. I love to hear their conversations – they learn the answers to questions they don’t know how to ask,” said Gregg, a retired Navy Chief Petty Officer.

Gregg is excited about future expansion of VUB services at Pensacola State. In particular, he is planning for VUB services to be available to residents in outlying areas through Virtual Tutoring at the college’s Century Center and South Santa Rosa Center.

“Veterans in the areas of Century and South Santa Rosa have been underserved because of the lack of public transportation,” Gregg said. “Through our Virtual Tutoring program, we will be able to give one-on-one, personalized tutoring to veterans who can’t come to the Pensacola campus.”

As a federal TRIO program, Gregg also pointed out that VUB is available to veterans no matter where they plan to enroll in college.

“VUB is housed at Pensacola State, but we welcome all veterans who qualify for the program and we are committed to helping them be successful wherever they plan to go to college,” Gregg said.

The VUB program requires that at least two-thirds of the participants meet income requirements and be first-generation-in-college. Participants must be military veterans who served in active duty in the U.S. Armed Forces for more than 180 days and received other than a dishonorable discharge, among other qualifications.

VUB is located in Building 6 on the PSC Pensacola campus and Rob Gregg can be reached at 850-484-1438 or rgregg@pensacolastate.edu.