PSC Ranks 26th in List of Most Affordable Colleges in Nation 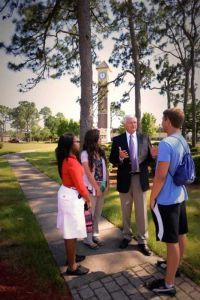 For the fifth consecutive year, the U.S. Department of Education lists Pensacola State College as a best value among public four-year colleges and universities.

Pensacola State is ranked 26th on the list of 68 institutions cited for lowest tuition in the DOE College Affordability and Transparency annual report. With tuition listed as $2,704, PSC is seventh among the 24 Florida colleges to make the most affordable list.

“I am very proud of this national ranking that again puts Pensacola State in the top one percent of affordability for four-year institutions,” said PSC President Edward Meadows. “But, more importantly, I am proud that Pensacola State is committed to keeping costs low while still providing our students with top-quality programs, faculty and opportunities for personal growth.”

Computations are based on data for full-time beginning students from the fall 2014 and spring 2015 terms. The report is available online at http://collegecost.ed.gov/catc/.