PSC Planetarium is open for group visits – facility closed during the pandemic, damaged in Hurricane Sally 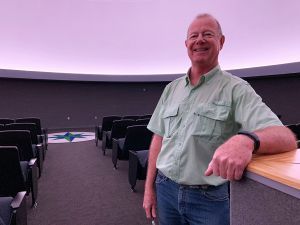 Pensacola State College Planetarium and Space Theater specialist Billy Jackson loves seeing the stars. But for nearly a year, something was missing.

“The stars are great,” Jackson said. “But I missed people.”

After shutting down at the beginning of the COVID-19 pandemic in spring 2020, the PSC Planetarium has now reopened to groups of 15 people or more.

“We’ve probably had about 20 shows since January,” Jackson said. “We’re still following all of the CDC guidelines ─ you have to be masked, and we’re social distancing. We have capacity for about 100 but we’re not admitting beyond half of that.”

It wasn’t just the pandemic that sidetracked the PSC Planetarium. Hurricane Sally in September 2020 damaged the structure’s ceiling, causing water to leak into the facility. All damage has since been repaired.

Now, the Planetarium is back giving visitors the chance to spy stars, constellations and even planets.

What is best way to spy a planet among all the stars?

Turn off the stars.

Mother Nature can’t do that. But Jackson can. At the PSC Planetarium, Jackson is the “Master of the Firmament.”

“We can showcase different constellations, or just turn of the stars to show the planets,” said Jackson. “Or I can show the passage of time. We can go forward in time, backwards in time. We can do a lot of amazing things.”

Since 1993, the College’s Planetarium has offered students – and the public – a glimpse into the heavens from images projected on the planetarium’s 40-foot diameter dome. If you remember going to the Planetarium before that ― say the 1960s or 1970s – it was a different planetarium.

“The old planetarium is where the weight room is now,” said Jackson, who has been the planetarium specialist for 14 years. “But this one has been here long enough now that I get College students stopping me and saying ‘I remember coming here in first grade. It’s not as big as I remember it.’”

But, Jackson said, that’s only because the children grew up. The planetarium, with just under 100 specifically-inclined seats to optimize viewing, is still the same size.

“The children love it,” Jackson said. “We get them enthusiastic about space and show them the sky in a way they’re not used to seeing it.”

The planetarium offers shows for groups of 15 people or more. There are 20 different shows available and are designed for certain age groups. The planetarium sees just under 10,000 attendees each year.

Shows include “Back to the Moon for Good,” “From Earth to the Universe,” “Perfect Little Planet,” and “Tales of the Mayan Skies.” But not every show is space-oriented. The planetarium also offers “Microcosm: The Adventure Within,” which explores the human body and its miniature bacterial inhabitants, and “Let It Snow: A Holiday Musical Experience.”

And popular with all age groups is the part of the show where Jackson has the night sky projected so that spectators can see – without the light pollution of society – the sky and its wonders more clearly.

“I tell them a little bit about the College,” Jackson said. “Then we do a night sky presentation and I narrate through that live. They learn to locate certain features – Orion and Orion’s Belt, Sirius, and any planets that are visible.

“The children are always excited to be able to go home and try to find one of those features they saw at the planetarium.”

He recalled one letter he received from a teacher where a student who had toured the planetarium had seen “Old Ryan in the sky.’” The student might have got the name a little mixed up. But to be able to find the “Old Ryan” constellation is an achievement for a child.

The planetarium also offers “Dark Side of the Moon,” a visual and aural exploration of Pink Floyd’s 1973 landmark album of the same title.

In 2019, the planetarium completed a two-year renovation project that included the repainting of the dome, computerized LED lighting, a state-of-the-art surround sound system, new seating and carpeting, and a streamlined control console.

It is one of the few planetariums in the region, though Pensacola Christian College also has a planetarium. Other than the two colleges, the nearest planetariums are in Tallahassee, Montgomery and New Orleans.

PSC astronomy instructor Lauren Rogers uses the planetarium while lecturing students at the beginning of each term. When she came to PSC three years ago, she was stunned to find that the College had a planetarium.

“It’s just an outstanding feature and learning tool for the students and the community,” she said. “It’s really uncommon to have a planetarium like this at any state college. We’re really fortunate.”

She said the planetarium offers a unique chance to educate her students that instructors at other schools just don’t have.

“The students, they just light up,” Rogers said. “And Billy Jackson is the best and always does a great job narrating in a way that really interests the students. The whole experience is just really cool.”

Scheduling a show is done by calling 850-484-2188 or by directing an email inquiry to planetarium@pensacolastate.edu.

The planetarium seats 97 with room for wheelchairs. Details: Email planetarium@pensacolastate.edu