PSC nursing pinning ceremony was bittersweet for one family 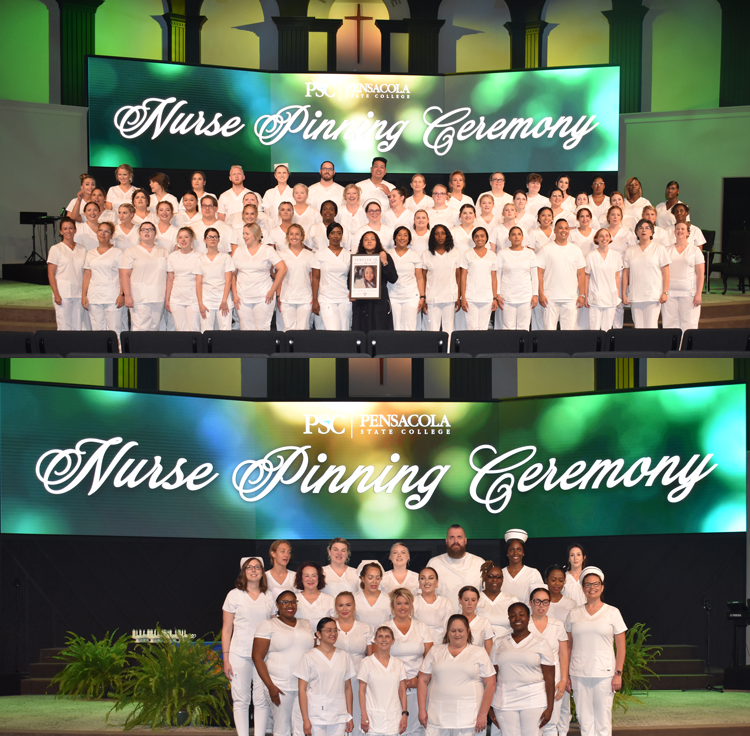 There were supposed to be 95 Pensacola State College students walking up to have their nursing pins pinned upon them at the Thursday, May 5, ceremony.

Yet in the seat where Jessica Cornelius should have been, there was only her framed portrait. When during his remarks, PSC President Ed Meadows told the students to look back toward their family and friends in the audience who had supported them during their academic journey, there was no sweet face that smiled and waved in gratitude to Jessica’s family.

Jessica Cornelius, a mother of four children, died suddenly and unexpectedly on Feb. 4, 2022. She was 39 years old.

Yet despite their immense pain, Jessica’s four children, her fiancé Paul Salas, mother, brother and other family members showed up to honor her and her classmates. Daughter Ayanna, 14, took the stage when her mother’s name was announced and was pinned in her name.

Salas, father of her children, said the family is proud of Jessica’s accomplishments.

“She worked so hard,’’ he said of Jessica’s pursuit of nursing. “So, it means a lot to be here today for the ceremony.”

He said Jessica’s classmates and College officials reached out to the family after Jessica’s death.

“That meant a lot, especially from her classmates,’’ he said.

When the nursing students did turn to their families to wave to them and thank them, there might have been some understandable sadness, but Salas said the family was and is proud of all the graduates.

“It’s a great moment,’’ he said. “They all worked hard and we’re really happy for all of them.”

Cornelius was one of 95 Associate of Science Degree in Nursing Students who received nursing pins and lit nursing lamps at the ceremony. The students graduated on Sunday.

Thirteen other students earned Bachelor of Science in Nursing degrees during Spring 2022 semester.

Students who earned Associate in Science Degree in Nursing include: