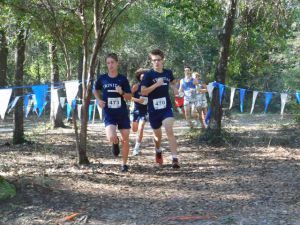 The race might have history, but the 3.1-mile Milton course is still fresh. In fact, the Wildcat Invitational was its public debut.

Now, not only does Washington High have a great new course to hold its Invitational – the school plans on returning to the Milton campus for the Wildcat Invitational next year and beyond – but the PSC cross country team now has its own course to host competitions in upcoming seasons. The PSC cross country team finishes its second season on Oct. 30 when the squad competes in the Region 8 Cross Country Tournament in Tallahassee.

The coaches, including Burger and Whatley, trimmed and cleared some bushes and limbs throughout the course, and also marked the course throughout with orange paint to help guide racers.

“It was awesome,” Falkler said. “The kids and coaches from all the schools loved the course. It’s a beautiful campus and a great course. And it’s a true cross country course – running through the woods on uneven grounds. And it was great to partner with PSC.”

Burger said the new course is a “win-win” for the whole cross country community in Northwest Florida.

“It’s great for recruiting,” Burger said. “Because we get to meet all the high school runners and coaches and they get to know PSC. And the plan is to hold (the Wildcat Invitational) there every year.”

Burger said she hopes to host a college meet or invitational on the course next season to give PSC a true homefield advantage for a change.

Whatley, who is part of a committee that schedules local high school cross country meets, had been wanting to lay out a cross country course for the College since the team debuted in 2019. When he found that Washington High was searching for a new location for its 2020 Invitational, he approached PSC President Ed Meadows to request permission for the College to host the event. At first, the Invitational was going to be held on a temporary course set up on the Pensacola campus, then Whatley began working on a plan to develop the Milton course.

“The (Pensacola campus course) wasn’t really working out and the runners didn’t really like it,” Whatley said, adding that Hurricane Sally’s effect on the Pensacola campus also was a factor in establishing a Milton course.

“(Coach Burger) and I had talked about establishing a course at Milton before and this was a great opportunity. Now Julie knows the coaches and teams from the area high schools, and she can see students she might want to recruit for PSC. And the kids get to see that there’s more to Pensacola State College than just the Pensacola campus.”