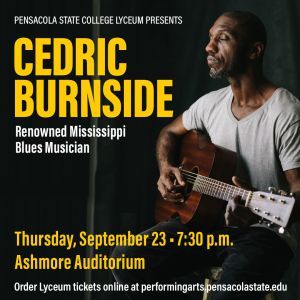 Live music is back at Pensacola State College!

This year’s Lyceum series features a variety of musical performers, ranging from blues and folk artists to classical pianists. The series also will feature a virtual discussion with popular NPR “Fresh Air” host Terry Gross that will be available only to PSC students, faculty and staff. Lyceum features various mediums, including visual and performing arts, as well writers, poets and speakers.

“We have all been awaiting the arrival of live music as part of the Lyceum series,” said Andrew Barbero, Lyceum director and PSC history professor. “This is something I’ve been dreaming about since the lockdown (in spring 2020). We had so much energy before then and so much excitement surrounding the events. We’re hoping that we can bring that kind of atmosphere back to the Ashmore (Auditorium). We have some top shelf artists and events planned that we’re really excited about.”

Cedric Burnside (7:30 p.m., Sept. 23) is only 43 years old, but he seems to have been a part of modern blues forever; his renderings of Mississippi blues are harmonious with the Hill Country Blues that have drifted through the northern part of the state for generations, a bookend to the Delta blues of the state’s southern region.

He is the namesake of the Cedric Burnside Project, an ensemble that featured his younger brother, Cody Burnside and their uncle, Garry Burnside. Cedric is also the grandson of legendary Mississippi blues’ artist R.L. Burnside. He was only 13 when he began touring with his grandfather’s band as a drummer, one of his two primary instruments along with guitar.

Burnside also is a two-time Grammy Award nominee, first when the 2016 album “Descendants of Hill Country,” credited to the Cedric Burnside Project, was a Best Blues Album finalist. He received a solo Grammy nomination in 2019 when “Benton County Relic” was nominated for Best Traditional Blues Album.

Earlier this year, he was awarded the National Heritage Fellowship by the National Endowment for the Arts. The fellowship is the U.S. government’s highest honor awarded in the folk and traditional arts.

He has also appeared in films, with cameos in “Black Snake Moan” and more. His most recent release is 2021’s “I Be Trying.”

Donna Lee (2:30 p.m., Oct. 17) is an acclaimed and accomplished pianist who made her solo debut with the National Symphony Orchestra in 1990. The Steinway Artist is currently Professor of Piano at Kent State University. She has performed at the Kennedy Center Concert Hall in Washington, D.C., the Lincoln Center in New York City and at concert halls in Asia and Europe.

Lee’s performance is part of the Kamerman Piano Series. The series honors Pensacola sculptor Sid Kamerman who passed away in 2015, and who was a champion for the arts in Northwest Florida.

Joe Pug (7:30 p.m., Oct. 19) is a critically acclaimed Americana folk singer-songwriter whose style is influenced from artists ranging from mentor and kindred musical spirit Steve Earle to John Hiatt and Warren Zevon. But musicians aren’t Pug’s only influences, as he has said that authors such as John Steinbeck, Raymond Carver and Walt Whitman have also impacted his work.

Pug’s most recent release is “The Diving Sun.” Popmatters.com said the album “is filled with songs of desperate inspiration, marking some of the finest work in the singer-songwriter’s career.” 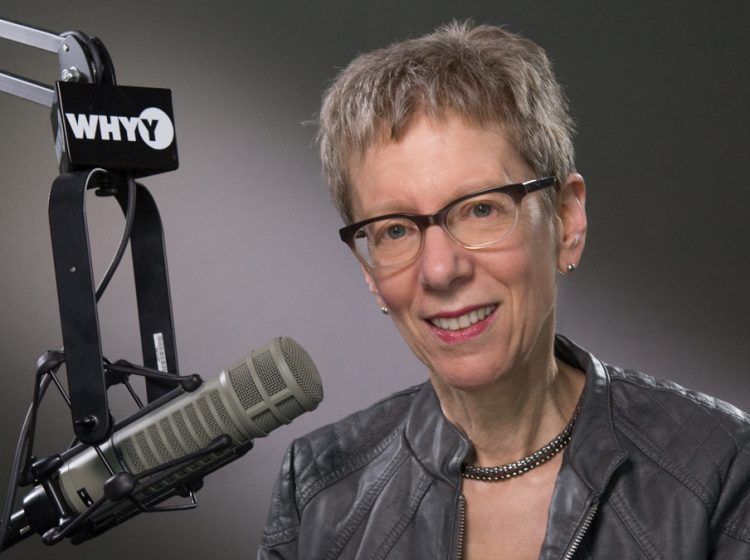 Terry Gross (7 p.m., Nov. 18, Zoom presentation) is host of NPR’s popular interview-based radio show, “Fresh Air,” which began as a local NPR program in Philadelphia in 1975. “Fresh Air” went national in 1985 and is now broadcast by nearly 200 NPR stations. In her career, Gross has interviewed thousands of public figures, including politicians, musicians, authors and more.

An acclaimed journalist and interviewer, Gross is a Peabody Award winner and has won the Corporation for Public Broadcasting’s prestigious Edward R. Murrow Award. Gross was inducted into the Radio Hall of Fame in 2012 and was awarded the National Humanities Medal in 2015.

The Boston Phoenix has called Gross “the best cultural interviewer in America and one of the best all-around interviewers ever, period.”

Gross is the voice of the character “Pam” on the HBO Max animated series, “The Fungies!”

John Paul White (7:30 p.m., Dec. 3) is a Grammy-winning folk/country singer-songwriter who once performed with the acclaimed duo, The Civil Wars, alongside Joy Williams.

His solo albums include “The Long Goodbye” and, most recently, “The Hurting Kind” on the Single Lock Records label, of which White is a co-owner.

Anastaysiya Naplekova (7:30 p.m., Dec. 5) is a Ukrainian-born pianist who is a past winner of the Rudolf Firkunsy International Piano Competition in Prague. She is a member of the piano faculty at the University of Florida’s School of Music.

She earned a doctorate in piano performance and pedagogy from the University of Miami – Frost School of Music.

Naplekova’s performance is part of the Kamerman Piano Series.

All performances are free for PSC students. Tickets are $11 and $9 for non-PSC students, senior citizens and children. Tickets are $7 for PSC Seniors Club Members, as well as PSC faculty, staff and Alumni Association members.

To purchase or reserve tickets, go to https://lyceum.pensacolastate.edu/. A link to register for the Terry Gross discussion will be available in a few weeks.