PSC Kids College director stepping down after decades at the helm 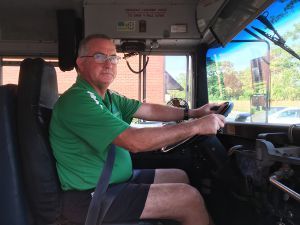 Pat Thomason moves and moves quickly. When he walks, it’s with purpose. When you’re responsible for mustering dozens of children and getting them to where they’re supposed to go, you better move with purpose.

“Earth Science and Zoology let’s go,’’ he said in a loud, clear voice to the dozens of children assembled in the room. A portion of the children move out through a door, heading for a bus parked right outside. He’d repeat the call for children enrolled in other classes at Pensacola State College’s 2021 Kids College ─ classes ranging from gymnastics to theater camp.

The 2021 Kids College ended the last week of July. And so, did Thomason’s time as director of the celebrated children’s camp. Thomason stepped down after 27 years as Kids College director. This was the 31st year the camp has taken place.

“It’s been great,’’ Thomason said of his time at Kids College. “I’ve met a lot of kids over the years, some of whom sent their own kids here when they got older.”

Thomason is a PSC alumnus who went on to earn bachelor’s degrees in marketing and business education.

“He welcomes the kids each morning and is here until the last kid leaves,’’ Walther-Thead said. “He knows the parents and grandparents of kids coming now who he remembers from when they were at Kids College years ago. Kids College has been around for 31 years and Pat has been involved almost since the very beginning.”

Thomason is also a teacher at Tate High School, where he will remain. He is the in-school suspension class teacher. But he’s leaving Kids College to spend time with his 18-month-old granddaughter – and an impending grandchild who is expected to be born around Christmastime. He and his wife Kim have two grown children – a son and a daughter – and Thomason hopes to spend much of his future summers with his grandchildren. (He’s also stepping down as a Tate High cross-country coach, a position he’s held at the school for decades.)

“My granddaughter was so little last summer, but now she’s a little older and there were times this summer I could have helped taken care of her,’’ he said. “And with a grandson on the way I’m going to want to spend time with both of them.”

Thomason does a little of everything at Kids College, even driving the bus to take the various camp groups to different parts of the campus. He helps check the kids in and out each day, makes sure where they are where they’re supposed to be, handles discipline problems and even keeps track of their allergies. And when he’s walking while working, watch out. He’s not just taking a stroll.

“He walks very fast and his mind is just as fast,’’ said Shirley Godwin, Kids College administrative assistant and a fellow teacher at Tate – she works with Exceptional Students. “He thinks 10 steps ahead of where you when you explain something to him. He’s always anticipating what’s next. And most importantly, he just loves the kids. He loves to joke with them and make them feel comfortable.”

Thomason has helped build the PSC Kids College into a stellar children’s summer camp experience, even winning InWeekly’s “Best of the Coast” award in 2019 in the “Summer Camps” category. There was no live Kids College in 2020 because of COVID-19, though there was an online virtual camp.

“It’s the people and the backing of the College that made it what it is,’’ Thomason said. “We want to make it fun and not too structured, but still keep it under control and make it worthwhile for the kids. It’s also great outreach for the College.”