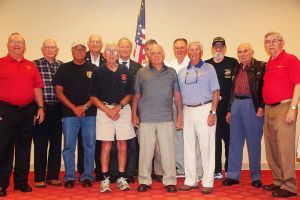 By Jen Ehrhardt and Sara Smith

On that Thursday, about 15 veterans shared their experiences with students, faculty and staff, and were recognized at an appreciation luncheon held at the Jean and Paul Amos Studio. The college also hosted a “The Things They Carried” book panel in Ashmore Auditorium.

Vietnam Veterans Day commemorates the sacrifices of those veterans and their families and is part of a national effort to recognize the men and women who were denied a proper welcome upon returning home more than 40 years ago.

The Vietnam War Memory Project is a Pensacola State large project that engages faculty, staff and administrators along with community members in supporting students learning based on the Vietnam War. A large project engages student in multiple disciplines for several semesters in a row, making for an interconnected, organic learning environment.

For example, students are likely to gain extraordinary experiences in class and during special events as participants in the project. This is the behind-the-scenes account and some student outcomes derived from the day’s events.

● At 8 a.m., Pensacola State English professor Julie Ruengert hosted six veterans who were interviewed by five teams of her Composition II students in her beautifully-decorated classroom.

The students were prepared with questions in order to find information for individual papers they are writing as part of the project. This was Ruengert’s first time hosting an interview session, so she had a right to be nervous.

The excitement was palpable.

“This is so cool. Look at the students — they are totally engaged,” Ruengert said while taking in the scene.

“These students are so engaged while listening to these veterans share their memories ─ what a rewarding experience to learn history firsthand from those who lived it,” Hubbs said.

The program continued after a brief intermission with a breakfast buffet sponsored by the Office of the President Ed Meadows.

“It was a beautiful display of community learning with community members at a community college,” said English professor Todd Neuman who brought English instructor Jamey Jones to see what was going on in this class as well.

“Wow! Man, this is what teaching is all about,” Jones added.

● Simultaneous to this second interview session, the college hosted the “The Things They Carried” book panel in Ashmore Auditorium.

The panel was about topics related to Tim O’Brien’s collection of linked short stories ─ “The Things They Carried” ─ the featured book for the project. In the work of fiction, O’Brien portrays the sacrifices and horror of war, the camaraderie of soldiers in combat, and the alienation many of the soldiers felt when they returned home.

Panelists were Pensacola State Librarian Chris Levesque, who offered a brief overview of the war; along with English instructor Sara Smith and her students, Jon Barnes and Magen Huntley, who discussed the book as a piece of literature; and (Bill) Clark who shared his real-life experiences and “the things he carried.”

The book panel allowed Smith’s students to expand their discussion beyond the classroom. The student-panelists had to modify their written analyses of the book significantly — condensing comments to conform to the brief time frame and adapting them for a large portion of the audience who may not have read the book.

Changing this content to suit the context was a valuable exercise in itself, but more importantly, the panel discussion projected their class conversations into a broader context, encompassing multiple disciplines and eliciting comments from an audience of not only Pensacola State students and faculty, but Vietnam War veterans as well.

“My students gained so much from being part of this event. The inclusion of an audience and venue beyond our classroom emphasized that what we are studying is real and relevant,” Smith said after the book panel.

“When students become personally invested in a project like this, they become active participants in a conversation that truly matters ─ one that has implications not only for understanding and honoring the past, but also for relating that past to the present day and using those reflections to inform their own perspectives. As a result, their written and verbal expressions become more authentic and thoughtful reflections of their own intellectual (and often moral) struggles. This is the point at which meaningful education begins.”

Online Public Speaking student Carly Brink who attended the session for extra credit said it was very interesting book panel, and she was she attended.

Brink’s informative speech as part of the project is based on interviews with two Vietnam veterans and their experiences during the war. She was able to relate the content of her speech to what student panelist Jon Barnes said about Tim O’Brien’s use of imagery and the life-changing experiences related to the war.

“I truly loved listening to the stories of others who are much older than me and the way life was like in comparison to now and their journey to how they got to where they are,” Brink said of her interview with (Bill) Clark.

“The students’ questions and comments were very thoughtful and reflected how engaged they [were] – excellent panel discussion,” she noted.

To practice interviewing skills and production of their own mass media artifacts, each student had been assigned a major story and one or two minor stories to get information for through the interviews. By the end of this semester, the resulting stories will be published in a class zine.

“It was a true honor for my husband and me to be in the presence of our ‘forefathers,’ ” she said of the experience.

The excited buzz in the classroom was so loud that Ehrhardt had to move some of the interviews to a second classroom.

“It is simply amazing to watch how the students who may normally be a bit aloof when it comes to traditional learning, absolutely take to the interviews and grow right in front of my eyes,” Ehrhardt said. “This is the phenomenon that motivates me to break down the walls of my classroom.”

The interviews from the three sessions were recorded with audio equipment borrowed from Veterans Upward Bound via Keith Wise (academic coordinator and Air Force Vietnam veteran) and The Corsair via Paula Ingram (English professor).

● At 12:30 p.m., the veterans who had been interviewed were joined by retired Marines Steve Wilson and Ernie Webb in the Red Room at WSRE Studio for an appreciation luncheon.

The seed for the luncheon was planted by a student who participated in the project in fall 2016. A veteran of two tours in Afghanistan, the student become very upset when he learned how poorly Vietnam veterans were treated when they returned from the war. Ehrhardt said the student almost dropped the public speaking course, but pushed through and ended his informative speech with a wish to offer Vietnam veterans a welcome home.

In a twist of the plot, the hero award goes to Carrabba’s Italian Grill for donating the food for this feast.

Culkeen along with Hubbs welcomed the veterans to the luncheon. Hubbs also introduced her WSRE original program, “They Were Our Fathers,” about fathers who died in the Vietnam War and the children they left behind.

Veteran John Paganelli was surprised at the official number of 20,000 children having lost fathers to the war ─ thinking it was a low number. In a poignant reply, veteran Mike Forrester said many of the troops lost had been too young to have fathered children.

Hubbs also shared the trailer for Ken Burns’ upcoming PBS documentary series, “The Vietnam War,” which will be released during this fall.

Following remarks, each veteran was recognized individually and presented a certificate of appreciation from Culkeen. Ehrhardt also recounted stories from the project relevant to the each veteran.

For example, she shared that (Herman) Spencer single-handedly took down the wall of the Son Tay Prison Camp.

“Herman affected my students in two very contrary ways — on one hand, they waxed poetic about his being a true American, which is great,” Ehrhardt said. “On the other hand, he caused their eloquence to deteriorate as they all call him, and I quote, ‘a total badass.’”

Commentary from the veterans indicated they enjoyed their day. Some of the honorees made it a point to brag about the students who interviewed them.

Business student Malaysia Saterfield commented on the conversations at her table.

“I am so glad we were able to show some gratitude to the veterans who generously shared their stories and perspectives,” Smith said.

Reflecting back on Homecoming Day ─ March 30, Hubbs added it was a noteworthy day for the entire Pensacola State family.
“It was such a memorable day in the company of some unforgettable veterans with incredible stories,” she said.