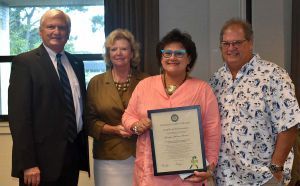 Jennifer Ponson helped Pensacola State College establish a SkillsUSA chapter in 2009. Ever since, her name has been synonymous with SkillsUSA in Northwest Florida, and throughout the state.

Ponson, a PSC alumnus, recently retired after working for the College for 33 years. In honor of her decades of service, the PSC Board of Trustees recently approved a Certificate of Commendation for her “unwavering commitment to excellence and outstanding leadership.”

Before becoming SkillsUSA adviser, Ponson began her PSC career in 1988 as an adjunct faculty member and director of the Dental Assisting program.

In 1997, Ponson helped develop the PSC Health Career Fair for high school seniors. She also served as coordinator of PSC’s Student and Program Outreach in the early 2000s.

But Ponson’s biggest mark has been with SkillsUSA. She brought the SkillsUSA Florida State Leadership and Skills Conference to Pensacola from 2012 to 2014 and again in 2018 through 2020.

In 2009, Ponson became SkillsUSA Florida Region 1 Coordinator – a position she held until her retirement. In 2020, Ponson was selected as Skills USA Champion of the Year for Florida’s Region 1.

In 2014, she was named a Florida SkillsUSA Honorary Lifetime Member.