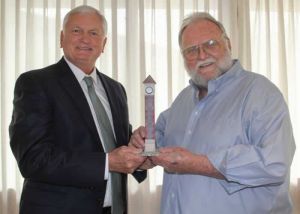 Visual Arts Professor Bill Clover was honored with a video tribute and a replica of the college’s M.J. Menge Bell Tower in celebration of his 50 years of service. Clover also shared memories of his first day teaching at then Pensacola Junior College in 1966. He is the longest serving faculty member in the college’s 68-year history.

Employees who have been at the college for 25 years were recognized as PSC Legends and received a pin and Legends certificate. Honorees were Tonie Anderson, Bill Hamilton, Greg Ledet, John Noski, Jennifer Ponson, Charles Schuler, Linda Sheppard, Charlotte Sweeney and Jeffery Wooters.


The celebration included hors d’oeuvres and music provided by the Performing Arts Department.