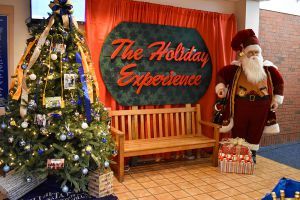 Projections of swirling snowflakes danced on the exterior brick wall, beckoning every visitor. Nearby, a handful of students and instructors huddled around a hardy campfire that crackled in heated rhythm.

If outside felt like winter, the inside of the Johnson L.I.F.E. Center on Pensacola State College’s Milton campus felt like a winter wonderland on Tuesday night.

Santa and Mrs. Claus greeted attendees at the door, and nearby student flautists serenaded guests clad in their seasonal best who had gathered for the annual PSC Holiday Experience.

Held annually, the event is a major fundraiser for the college and helps provide scholarships for students in need as well as program additions/improvements.

“PSC means so much to this community,” said Pensacola Mayor Grover Robinson, one of many dignitaries and PSC donors at the event. “It’s one of the reasons we’ve been giving for over 20 years. There are so many students who want the opportunity to get a great education, but they might not be ready to leave Northwest Florida. We want to give them the opportunity to stay here in Northwest Florida and get a quality education.”

The Holiday Experience’s theme was “A Starry Starry Night,” and though the December sky was clear, the stars of the night were the cosmetology and welding students on the Milton campus, who gave demonstrations to visitors.

“In our minds, our students are our stars,” said Andrea Krieger, executive director of the PSC Foundation, speaking to the gathered guests. She then noted that PSC students would be seated at the various dining tables set up in the festive, decorated Johnson L.I.F.E. Center.

“It really is all about helping the students,” said Jo-Ann Price, who, along with husband Michael Price, are presenting sponsors of the Holiday Experience. “Michael and I like to focus on education, helping families and helping veterans. And Pensacola State College can accomplish it all.”

A highlight of the evening was the areas where students demonstrated what they have learned.

“This will give you an idea of what it’s like,” said PSC welding student Timothy Stephens as he “virtually welded” materials on a screen in the PSC mobile welding trailers, where simulators were set up for use. “You don’t get the noise and the sparks. It’s nothing near what the real thing is. But it’s close enough.”

A few yards away from the trailer, PSC Milton Outdoor Club members and advisers pitched a tent and lit a toasty, roasty campfire to sit around and swap stories.

“We go camping up in North Carolina, which is a good experience for the students,” said Logan Fink, PSC biology professor and Outdoor Club adviser. “They perform a lot of service projects and the students with the highest (service project) points go with us.”

Inside, after dinner, the Pensacola Civic Band performed holiday classics, while conductor and the PSC department head of performing arts and director of bands, Don Snowden, urged the crowd to sing along, even threating to start over if he didn’t hear enough people singing.

Asked before the performance how he thought it would go, a jovial Snowden promised he “wouldn’t play a wrong note.”

Guest speakers relayed their experiences with PSC, including Bo Johnson, former speaker of the Florida House of Representatives, who earned an A.A. degree from then-Pensacola Junior College in 1971. He met his wife Judi Johnson on campus and the L.I.F.E. Center bears his name.

“I met this lovely lady here at Pensacola Junior College,” Johnson told the crowd as his wife stood. And he works out at the L.I.F.E. Center regularly.

Johnson said “the role of Pensacola State College is to spread knowledge throughout our community,” and singled out the welding and cosmetology programs for moving graduates directly into the workforce.

Mayor Robinson also noted that it is PSC’s commitment to workforce development that makes PSC such an important presence in the region.

“One of the reasons we contribute is the workforce development side,” Robinson said. “It changes people’s lives so they can have a career and they can change their skills. There’s no other school that can do that in Pensacola and Northwest Florida. We’re very grateful for PSC.”

Scenes from the 2019 PSC Holiday Experience

The PSC Milton Campus was the host for the 2019 PSC Holiday Experience on Dec. 3. The evening featured a performance by the Pensacola Civic Band.