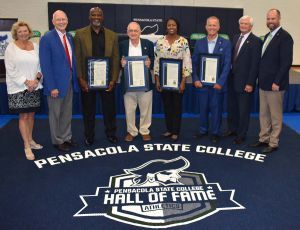 “Hard-Hittin’” Mark Whiten’s legend was cemented in the Major League Baseball record books for all time when he hit four home runs and drove in 12 in one game while playing for the St. Louis Cardinals against the Cincinnati Reds on Sept. 7, 1993.

Whiten was one of four Pirates inducted into the Pensacola State College Athletics Hall of Fame on Sept. 9 as part of the annual Pirate Experience celebration in the Lou Ross Center’s Hartsell Arena. A video of his four-home game was one of many highlights of the evening.

Also inducted into the 2021 PSC Athletics Hall of Fame were:

• Florida Sen. Doug Broxson, first president of the College’s Booster Club.
• Catherine “Miss G” Gifford, a 50-year PSC employee who served as a beloved tutor to student-athletes for 30 of those years.
• Gerald McArthur, official PSC basketball scorer for 32 years and a charter member of the original Booster Club.

The Pirate Experience is the annual event where fans and boosters can tour the facilities and are introduced to the PSC athletic teams – men and women’s basketball, baseball, softball, volleyball and cross-country. (Though annual, The Pirate Experience was canceled in 2020 because of the pandemic.)

The evening started with the Pirate family dining on food from Bubba’s 33, while a polished and colorful video featuring athletes and teams played on large screens in the Hartsell Arena.

(Actually, it started pre-meal with Whitten meeting with the Pirate baseball team to offer players encouragement and advice. One gem was about keeping up with academic work: “If you’re not getting the grades, guess what? You’re not playing. They don’t want anyone who isn’t making the grades. They want you on the field, not on the sidelines.”)

PSC President Meadows was one of the first speakers, and stressed academics.

“It’s such a privilege to see all our student-athletes,” Meadows said. “All of you are here because you’ve done something right. There’s nothing better than to see a student come to PSC for athletics, because we know they are a student first.”

Then, Bryan Lewallyn, PSC athletic director and head baseball coach, introduced the coaches, who spoke about their respective teams.

Afterward, the event segued into the Hall of Fame inductions, featuring guest emcee Chad Brilliante, a popular host on ESPN Pensacola. Brilliante talked about each inductee, while Meadows, PSC Board of Trustees Chair Margie Moore and PSC Booster Club President Mike Goehring presented the inductees with their Hall of Fame proclamations.

“Having these two events combined enriches both sides,” said Hailey Lotz, director of the Alumni Association and Booster Club Operations.

“For our athletes, the Hall of Fame represents possibility and responsibility of ‘Pirate’ character. Seeing the athletes faces light up in awe as they witnessed Mark Whiten’s historical moment with the St. Louis Cardinals was priceless. At the same time, I believe our Hall of Fame inductees are reminded of just how special PSC is and can feel the energy from our fans and student athletes as we celebrate their success.”

Here is a closer look at the Hall of Fame inductees:

He has been a supporter of PSC both personally and politically and was instrumental in the state’s funding of new construction to replace the Baars Science Building with the new Baars Technology Center.

After graduating from PSC, Broxson played baseball at Evangel University.

● Gifford began her career at PJC in 1968 as an English Composition, Honors English and Development English instructor. She also worked in the College’s Writing Lab. For more than 30 years, she served as the English and Writing tutor for the Athletics Department – assisting countless student-athletes.

She was awarded the 1990 Golden Apple “Teacher of the Year” Award and was inducted in the College’s Academy of Teaching Excellence in 1991.

Raised in Greenville, Alabama, Gifford graduated with honors from Auburn University in 1954. Before coming to Pensacola State, she was a teacher at Pensacola High School from 1954-1958.

● McArthur is a 1955 Pensacola Junior College graduate and went on to Florida State University where he earned his bachelor’s degree in 1957.

A veteran, McArthur served in the U.S. Army and later in the Governor’s Office under the Honorable Faris Bryant. He remains an active member of the PSC Athletics Booster Club.

Active in the community, he has worked with the United Way of Pensacola, Monsanto Credit Union, United Cerebral Palsy of Northwest Florida and the Bill Bond Youth Baseball League.

McArthur is a 1953 graduate of Pensacola High School.

● Whiten is a Pensacola native and a 1984 Pensacola High School and Pensacola State College graduate.

Since retiring, Whiten has coached baseball at Middleton High School in Tampa and has volunteered for eight years for the North Seminole Little League.