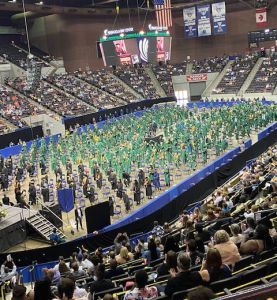 Held in the Pensacola Bay Center, the ceremony was livestreamed and included a virtual (video) ceremony for Fall 2020, Spring 2021 and Summer 2021 graduates who could not attend the event.

Husband-and-wife team Cyrus and Raleigh Gharbi, as well as father and son Anthony and Wayne Hurd, were among the graduates who walked across the Bay Center stage to receive their degrees. 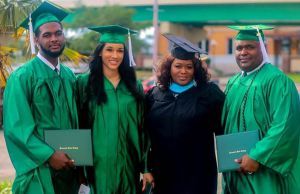 To maintain high grade point averages, the couple admitted to competing against each other.

“That was actually the best part – doing everything together,” Raleigh Gharbi said. “We were able to study together and were very competitive. We always tried to outdo each other. It was a lot of fun.”

The Gharbis have three children ─ Christian, 15, Isabella, 13, and Miyah, 8 – who are proud of them.

“But they did say we were always on the computer,” Raleigh Gharbi said. “Christian is about to get a taste of college. He’s about to start dual enrollment at the College and will take the PERT test this summer.”
For the Hurd family, the PSC graduation was a threefold milestone because Anthony Hurd’s girlfriend ─ Marissa Brown ─ also received her associate degree.

“It was definitely a moment to remember. To walk across the stage with my dad and girlfriend was a blessing to say the least,” said Hurd, a Realtor with eXp Realty.

Hurd also is the son of Pensacola State’s own Lois Hurd, a career and technical education specialist, who earned her master’s degree this spring from Liberty University.

A family of strong faith, Cyrus Gharbi attributes his and his wife’s academic and personal successes to God.

“Honestly God put PSC in our paths, we went through some hard times – some financial trials. We were homeless for a while but once we got back on our feet we were ready for better careers,” he said, adding both want to work in mental health counseling.

“I especially want to work with people who are recovering from addiction. I feel like I have a real heart to help there.”

The Gharbis also have nothing but good to share about their time at PSC.

“It’s a really open place where you can get an education. The professors and instructors really want you to succeed and are willing to help you,” Cyrus Gharbi said. “It wasn’t the easiest thing to go back to school with me being 40 years and having worked construction since I was 19 or 20 years old. But the support I received at PSC made it a seamless transition.”

Hurd said Sunday’s graduation was something of a fluke for his family. 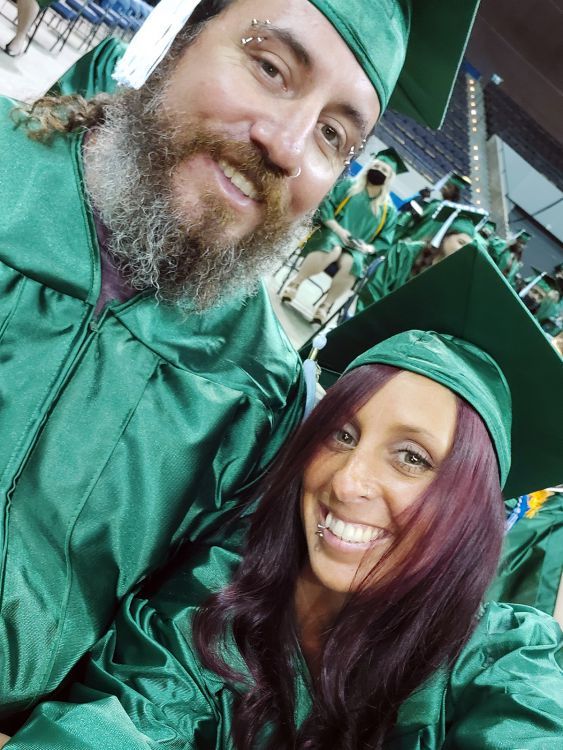 “We never planned to all graduate together, but it happened,” said Hurd who plans to pursue his bachelor’s degree at PSC.

“My father wanted to graduate with me and my mom,” he said, noting there are more Hurds to graduate from the College.

His two younger brothers, Desmond, 20, and Tyrone, 18, are both PSC students.

“They should be graduating soon so there will be even more of us walking across the Bay Center stage,” he added.

“Flash” Gordon Sprague, a businessman, philanthropist, farmer and former NASCAR driver, was the graduation’s keynote speaker. A member of the PSC Foundation Board of Governors, Sprague also is the chairman of the College’s “Your Community Your Legacy” comprehensive campaign.

Anita Spicer, the College’s events coordinator, described the event as festive from start to finish.

“When the Hurds announced they were father-and-son, the entire crowd went wild. The same thing happened with the Gharbis, there were even a few people blowing air horns,” she recalled.

Spicer said the commencement was still a COVID-19 event – graduates were spaced out on the Bay Center floor; all attendees wore masks; and there was no processional – but the pomp-and-circumstance tradition was obvious at the event.

“We even had some May 2020 and Summer 2020 graduates to take part in the ceremony. I think the graduates and their family members were very excited to come back and walk across the stage,” she added.