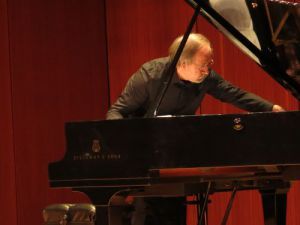 Coleman’s winning composition, “Room 857,” is written for solo piano. A Pensacola State adjunct music instructor for more than 24 years, he will perform the piece in August at Ehrbar Hall in Vienna, and at Bӧsendorfer Hall at Mozarthaus during the Golden Key Music Festival at Vienna.

Since its inception in 2002, the Golden Key Music Festival of the United States has established itself as a major cultural event that attracts instrumentalists and vocalists from across the U.S. and other continents. The competition’s mission is to give musicians the opportunity to display their talents on some of the most prestigious concert stages.

And his “The ‘96 Etude” will be released on Steinway’s Spirio recording project by Steinway Artist Kadisha Onalbayeva. The work is dedicated to Onalbayeva who recorded it at Steinway Gallery in New York. She also will perform the composition on June 6 at Carnegie Hall.

Last fall, Onalbayeva also performed “The ’96 Etude” at the University of Mobile and the Spanish Fort Steinway Gallery. On Feb. 27, she performed the composition at William Carey University in Hattiesburg, Mississippi, and will perform it again on April 29 at the Legacy Series at Trinity Presbyterian Church in Pensacola.

Coleman’s “Ritratto No. 1” (for solo flute) was premiered by flautist Hillary Tidman on Oct. 15 at the Birmingham (Alabama) New Music Festival. He also had two other piano works to premiere at the festival.