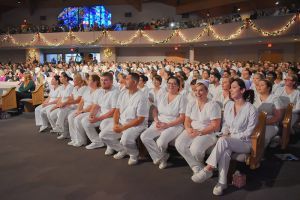 Erik Blount cried a bit when he received his nursing pin Thursday at Brownsville Church.

Then he danced and hopped and raised his hands to the heavens in joy as his fellow nurses, loved ones and hundreds of spectators cheered on wildly, moved by Blount’s emotion.

Blount, a first-generation college graduate, was one of 136 Pensacola State College students to receive nursing pins at the ceremony. Many of the new nurses have already landed jobs at local hospitals and health care facilities.

“I’ve got a nurse in the family,” said his proud papa, Warren Blount, also a bit teary-eyed as he talked about his 22-year-old son. “I am super proud. I am ecstatic. I told my son growing up, you have to break the cycle. There are too many young black men and women in jail, in trouble. I told him he has to break the cycle because the struggle is real.”

Most of the graduates are registered nurses who have earned a Nursing RN Associate In Science Degree, though some were pinned as licensed practical nurses after earning a career certificate in the Practical Nursing Program. Some will go on to earn a Bachelor of Science in Nursing (BSN) Degree from Pensacola State.

The college’s BSN Program was named the 10th best in Florida earlier this year by U.S. News and World Report.

“It’s a very special time,” said Susan Perankovich, the college’s director of Nursing and Emergency Medical Services. “The pin is a symbol of their accomplishments and the culmination of two tough years.”

The ceremony in a packed Brownsville Church was emotional for the students – and their loved ones. 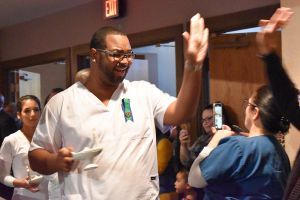 Erik Blount is emotional as he celebrates his new life as a freshly-pinned nurse. Photo by Zack Blessing.

“I’m just trying not to cry,” said Jessica Lowe, moments before the ceremony. “It’s been two years of hard work and it’s all coming together into one moment now. The whole (coursework) experience was incredible. It was new, it was fast-paced and you just had to hold on as tight as you could and just go.”

Keynote speaker Kimberly Engelhardt, director of Women’s and Children’s Services at West Florida Hospital, told the audience of harrowing struggles in Haiti following the country’s devastating earthquake in 2010 and how nurses responded to the call.

It’s that kind of compassion and willingness to serve that sets the noble profession apart from other occupations, Warrant Blount said, referring to his son and fellow nurses.

“You can’t just say you’re going to be a nurse,” he said, his arm wrapped tightly around his son’s broad shoulders. “You have to have in your heart. It has to be inside you.”

As for Erik Blount’s exuberant dance in front of the crowd?