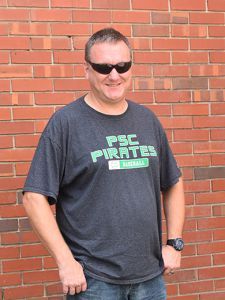 “Gratitude is not an emotion, it’s a verb,” declared Pensacola State College cybersecurity student Kiley Godwin. “You can feel like you owe somebody all day long, but it isn’t gratitude until you express it in some way.”

Godwin said he’s working hard to quantify his gratitude with a number – 3.72.

“My GPA should be part of that gratitude, my willingness to let people know how much the staff (at Pensacola State) helped me get started.”

Godwin’s journey in life began with a tragic loss. A car accident left him physically and emotionally scarred at age 2. It also took his mother’s life.

Losing his mother at a young age impacted Godwin deeply and he said he always felt a void, but it also helped him to understand his obligations.

“It kept me grounded, I guess you could say,” reflected Godwin. “I have always known that this world contains loss. It was the first lesson in my life.”

His father remarried, and Godwin credits his blended family with helping him get through his personal struggles.

“There would be no good ending to my story if my stepmother had not walked into my life when she did. … A psychologist told my father that due to losing my mother the way I did – if I even graduated from high school ─ I would not amount to much,” said Godwin, who graduated fourth in his class from Ernest Ward High School in 1990.

“The gentleman did later say that he was never more delighted to have been wrong.”

Things seemed to be improving in Godwin’s life when he earned a scholarship and headed off to the University of Florida to study computer engineering. However, he experienced another setback when he lost his scholarship.

“I was not ready,” Godwin admitted. “I did not have the drive or desire. I failed miserably.”

Godwin continued to push on and recalled his father’s words.

“’Setbacks are normal … the only thing that makes a difference when you have a setback is how you decide to recover,’” quoted Godwin, who emphasized, “Notice that I did not say ‘when,’ I said ‘how.’ The timing of the recovery never matters, so don’t worry about how long it takes you to feel ‘normal.’”

Godwin joined the U.S. Navy after leaving school, where he attended nuclear power school and served aboard the USS Dwight D. Eisenhower aircraft carrier. After completing his service in May 1999, Godwin said he went to work immediately for a nuclear reactor company, where he stayed until 2002.

Godwin took a semester of classes at Pensacola Junior College to complete his associate degree in general studies and then spent the next decade drifting between various customer service jobs until he went to work for Oceaneering International as a remote-operated vehicle technician in May 2012.

“There’s something about May where I always seem to be starting something new and improved,” commented Godwin, who said he was glad to be working with computers again.

Then yet another setback came along ─ this time in the form of a layoff in 2015 after the offshore drilling market took a dive.

Godwin’s next job search led him to a position as a clerk at a convenience store and a realization that he needed to take measures to get back on track. He decided that the cybersecurity program at Pensacola State was his ticket and he began taking classes in August 2016.

“Changing the direction of your life is not easy, it’s never supposed to be. The key is to get started and be serious about it,” he said. “When people see that you’re serious about going in a new direction and they see how hard you’re working, they will have a little faith in you and they will remove the barriers that were in your way.”

He found the people who could help him at Pensacola State.

“Pat (Owens) in Dean (Kirk) Bradley’s office ─ she was instrumental in helping me pay for my first couple of semesters,” he said. “I can trace all of my success back to her and (Morris) Buchanan.”

Owens retired in February 2018 and Buchanan is the current department head for the computer science department.

Godwin, who has two adult children from a previous marriage, married his wife Michelle in November 2016 and has continued to grow during his time in the cybersecurity program. He’s looking for ways to implement technology to improve performance in his cashiering job, he’s entertaining a couple of internship offers and he’s working to raise his GPA as his ongoing expression of gratitude.

“The stakes are extremely high,” he added. “An 18-year-old who screws up at college is one thing ─ I have a family.  I have one career behind me.  The stakes are a little different.”

Godwin is using the lessons he’s learned throughout what he calls his “recovery” and his Christian faith to create his own outcome and hopes to impart that wisdom to others. He said he’d offer the same advice to a person whether they are a young adult who needs help graduating from adult high school, or if they are 45 years old and working at a convenience store.

“Ask everyone who you think would know for advice on how to make a change in your life. When the message starts repeating, that’s the advice to take,” he advised.

As for returning to College: “They will give you some work to do. Do it. Complete your financial aid applications. Speak to a career counselor and do not stop asking for help in getting resources you need to make the change you are thinking about.”

And finally, Godwin offered, “There will be days when you are discouraged. Keep. Going.”

Godwin plans to graduate with his Bachelor of Applied Science Degree in Cybersecurity in 2020 … in May.