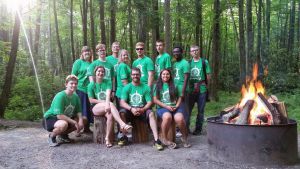 Twelve members of Pensacola State College’s Outdoor Club experienced the adventure of a lifetime June 4 -9 during a leadership and skill-building primitive camping trip to North Carolina.

The students, who were all relative strangers before the outing, worked together to set up campsites, climb mountains, hike trails, identify foliage and natural formations, explore old homesteads and navigate whitewater rafting on Standing Indian Mountain in the Nantahala National Forest.

“The object is to put them in a different situation that requires a skill they may have to learn on the spot with people they don’t know, so they have to bond. They have to work together,” said Anthea Amos, dean of Pensacola State’s Milton campus and a club adviser for the past 16 years.

“It pushes them to limits … they walk farther, they climb higher, they’re doing things they would normally not opt to do ─ but it is what we have to do because we can’t leave anyone behind,” Amos said.

The Outdoor Club was originally founded more than 30 years ago by retired faculty member Conrad Brewer and current associate biology professor Logan Fink as an avenue to inspire stewardship and community service by way of leadership, skill-building and volunteering. Fink, who still serves as a club adviser along with Bigelow-Jordan, then expanded this to include camping.
Church, who is studying health management and nursing, said he didn’t consider himself as someone who would “do woods” but admitted taking the camping trip helped him to become more outgoing and pushed him to new heights.

“Like jumping off cliffs into rapids. I held my best friend’s hand and we jumped together. We were closer after that,” Church said.
Godwin said she loves the outdoors and has had experience working on her grandparents’ farm in Jay. She found this trip helped her strengthen the bonds with people that she’d only known in passing.

“You’re with your family every day – you’re just used to doing everything with them, but these people are not your family …” Godwin said. “After spending a week with them, they pretty much become your family.”

Next year, Godwin will be attending the University of Florida at Pensacola State College through the 2 + 2 program, which offers UF Bachelor of Science degree programs in natural resource conservation and plant science on the Milton campus.
Church and Godwin enthusiastically described their experiences exploring underground caverns, mining for precious gems, observing bears from a safe distance, preparing “hobo stew,” witnessing a lightning bug jubilee and attending an outdoor play based on the Trail of Tears.

“It was incredible!” Godwin said.

“I can start a fire,” Church added proudly. He volunteered to rekindle the fire at 5 a.m. every day, before the other campers were up. “The owls scared me the most … they sounded like coyotes!” Church said.

Amos said some of the students she takes, like Church, have never camped before in their lives. However, the experience changes them and they often return with their own families.

“We even had four students from two separate trips who met, later married, and went back for their honeymoon,“ said Amos, who has camped in the area since she was a child.

Amos encourages others to explore the educational and physical challenges that can be found in wilderness adventures and stressed, “You don’t understand until you go.”