PostSecret creator to share message at Pensacola State on Jan. 26 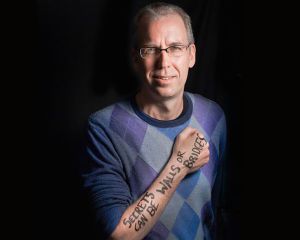 Is there a secret you need to get off your chest? Or do you want to admit how you really feel about an issue, incident or person?

On Thursday, Jan. 26, Pensacola State will provide the opportunity to cleanse your spirit when the college hosts PostSecret creator Frank Warren from 6-7:30 p.m. in the Jean and Paul Amos Performance Studio.

During the interactive PostSecret Live free event, Warren will engage the audience with humorous and inspiring tales behind the secrets, discuss his blog and share how it led him to make suicide awareness part of his life’s work.

Created by Warren, PostSecret allows people to anonymously write their secrets on homemade postcards. The writers never reveal their identity and some of the secrets are published on Warren’s PostSecret website, used in his books or featured in museum exhibits.

Postcards, pencils and markers will be supplied to attendees who can (anonymously) decorate and write their secrets on the cards, and mail them to Warren.

“What started as a community mail art project quickly exploded in popularity since PostSecret’s inception in 2004,” said Warren who added to date, he has received more than 1 million anonymous secrets on homemade postcards.

He also has raised more than $1 million for suicide prevention over the past 12 years.

Liz Moseley, Active Minds faculty adviser at Pensacola State, said the Post Secret movement offers support for people who may not speak openly about their problems.

“Frank Warren has opened a window through which we think we may see the innermost thoughts of others,” she said. “Surprisingly, what we see is a mirror. Recognizing that others have had some of the same thoughts and feelings that we hardly dare acknowledge to ourselves, we feel less alone.”

Warren will sign copies of his most recent book, “The World of PostSecret,” a New York Times bestseller. One of his books, PostSecret: Confessions on Life Death and God,” has even reached No. 1 on the Times bestseller listing. And PostSecret postcards have been exhibited at the Museum of Modern Art in New York and the Visionary Art Museum in Maryland.

He has appeared on Good Morning America, The Today Show, 20/20, CNN and NPR talking about his six PostSecret books; the PostSecret Play, “PostSecret: Unheard around the World,” and emotional PostSecret events held worldwide.

Seating is limited but PostSecret Live is free and open to the public. It is co-sponsored by the Lakeview Center, Pensacola State Student Leadership and Activities, Pensacola State C.A.R.E.S. and PSC Active Minds.

If you go
What: PostSecret Live featuring Frank Warren
When: 6-7:30 p.m. Thursday, Jan. 26
Where: Jean and Paul Amos Performance Studio, Pensacola State College, Pensacola campus
Cost: The event is free and open to the public.
Details: Rachelle Burns at (850) 484-1817