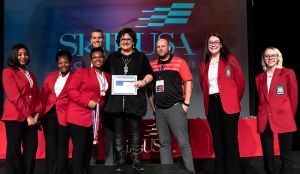 Jennifer Ponson’s name is synonymous with SkillsUSA – not only at Pensacola State College but throughout Florida. This year, she was named the SkillsUSA Florida Region 1 Champion of the Year.

In 2009, Ponson chartered the College’s SkillsUSA chapter and became the adviser. Less than a year later, she was named the SkillsUSA Florida Region 1 Coordinator – a position she still holds today.

“When I took over as the regional coordinator, Region 1 had about 75 SkillsUSA members. Today, we have more than 1,000 members in Region 1 and 19 middle school, high school and college chapters,” said Ponson, who admitted she was surprised to receive the accolade.

“I’ve worked on a lot of awards programs but had no idea that I had been nominated for Champion of the Year. I want to say ‘Thank You’ to SkillsUSA for honoring me.”

To say that Ponson hit the road running during her early SkillsUSA days would be an understatement. That first year, the PSC chapter had 10 student-members.

“Getting the chapter started was one thing, but we had to build. Now we have more than 200 members. We’re a total participation campus, which means our SkillsUSA chapter is open to all PSC students – especially those enrolled or involved in CTE (Career Technical Education) programs,” she said.

Since the chapter began, the College has had students compete in the SkillsUSA national conference held annually in Louisville, Kentucky.

“Growing the organization was one of my primary goals when I took over as coordinator. Region 1 now has largest number of middle schools SkillsUSA chapters in Florida,” she noted.

Ponson describes SkillsUSA as an organization built around enhancing student-members’ personal, workplace and technical skills while remaining grounded in academics.

“SkillsUSA is so much more than an award. It is the framework that makes the whole person. When you are working, it’s not just about being able to perform the skills. You also must understand work ethics, integrity as well as being responsible, adaptive, flexible and an effective communicator in order to be a valuable and productive worker,” she explained.

“That is what SkillsUSA teaches. The organization also stresses teamwork. Nothing happens with only one person. It’s about teamwork – learning to plan, organize, manage. These are key components of being a productive employee. You’ve got to be self-motivated ─ be able to jumpstart yourself and think outside of the box.”

Ponson also never “shies away from” a challenge. Under her leadership, Pensacola State hosted the SkillsUSA Florida State Leadership and Skills Conference in 2012, 2013 and 2014. PSC hosted the events again in 2018 and 2019. The College was scheduled to host the 2020 conference, but it was cancelled due to COVID-19.

Ponson has no idea how much time she spent planning the conferences, which brought thousands of SkillsUSA Florida student-members, advisers and relatives to Pensacola. Effective planning, a PSC support team and community and business partners are the keys to successful conferences, she added.

During the three-day events, Ponson said she started each day about 6:30 a.m. and ended after midnight.

“You can be as prepared as possible, but when the conferences happen, there are always last-minute changes. I think the greatest thing I have learned is the value of teamwork ─ when you turn over duties and trust others to do the job,” she said. “I thought I had to do everything in the beginning, but you have to trust in other people – that is when it becomes great. That seems simple, but I grew to understand what teamwork really meant. When you start working with others, you grow because of the sharing of information and experiences.”

Ponson joined the Pensacola State family more than 32 years ago – first as a student.

“Early on in my PSC career, I taught radiology on the Warrington campus and was the Dental Assisting Program Director for eight years,” said Ponson, a 1982 Pensacola Catholic High graduate and Alumni Hall of Fame inductee. She attended Pensacola Junior College on a cheerleading scholarship and earned a bachelor’s degree from the University of West Florida.

“I moved into Workforce Education’s Recreation and Leisure Program and developed and sold Health Program Training classes (continuing education credit) to hospitals and nursing homes. I even started the Kids College on the Warrington campus.”

Currently, Ponson also is the College’s coordinator of Student and Program Outreach. She and her husband, Randy, have one daughter, Whitney, an assistant public defender in the First Judicial Circuit.

PHOTO: Jennifer Ponson is pictured with her SkillsUSA Florida Champion of the Year Award and Pensacola State College SkillsUSA student-members.